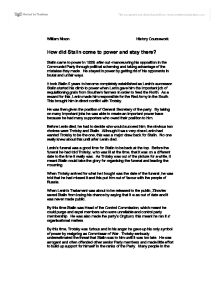 How did Stalin come to power and stay there?

William Nixon History Coursework How did Stalin come to power and stay there? Stalin came to power in 1929, after out-manoeuvring his opposition in the Communist Party through political scheming and taking advantage of the mistakes they made. He stayed in power by getting rid of his opponents in brutal and unfair ways. It took Stalin 5 years to become completely established as Lenin's successor. Stalin started his climb to power when Lenin gave him the important job of requisitioning grain from Southern farmers in order to feed the North. As a reward for this, Lenin made him responsible for the Red Army in the South. This brought him in direct conflict with Trotsky. He was then given the position of General Secretary of the party. By taking on many important jobs he was able to create an important power base because he had many supporters who owed their position to him. Before Lenin died, he had to decide who would succeed him; the obvious two choices were Trotsky and Stalin. Although it was very close Lenin had wanted Trotsky to be the one, this was a major draw back for Stalin. No one really knew about this until after Lenin died. ...read more.

Once Stalin was in power he found it easy to stay there, through harsh ways he defeated his opponents. As Stalin's supporters now filled the Politburo, he now had a good relationship with the members, which meant he could make as many new policies as he wanted without having people oppose them. Stalin made new economic and social policies all of which were carried through. As part of his economic policies, Stalin decided to modernise the USSR as it was far behind any other country, technology wise. Stalin himself said, "We are 50 to 100 years behind the advanced countries." To start with brought peasants in from the country to towns to work in newly built factories. He dedicated these factories to building artillery. He came up with 3 'Five Year Plans' each of which were set up to enable the USSR to 'Catch-Up' with technology. The 1st FYP was dedicated to building new industrial cities from nothing and setting up steel mills in many places. The 2nd FYP was focused on the 1st but built upon it. Heavy industry was still a priority but other areas, such as mining for lead, tin, zinc and other minerals, transport and communications and railways and canals, were developed. ...read more.

He made sure he was close to Lenin so that he was popular with the people. He used the positions of power that he held very shrewdly by making sure that anyone who opposed him lost their job and putting in their place people who would support him. He was very ruthless and played those who opposed him, such as Trotsky and Bukharin, off against one another. Once in power he ruled by fear by controlling the people so that they would be too afraid to oppose him. He used the secret police to crush any opposition. He remained popular with the people by developing the 'Cult of the Personality'; history was rewritten so that Lenin and Stalin were the only heroes of the Revolution. He used propaganda to good effect especially in Education. Portraits, photographs and statues of Stalin were everywhere and everything was done to promote Stalin from street names to poems about him or music composed praising him. Religious worship was banned, as he did not want the people to have any loyalty other than to him. Stalin had control of everything, from the economy to the mass media and freedom of speech was denied to Soviet citizens. So it was by these means that Stalin was able to take power and hold on to it after Lenin's death. ...read more.