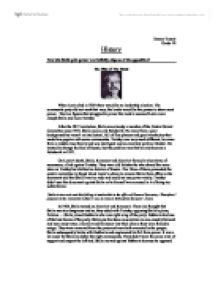 How did Stalin gain power and initially dispose of his opposition?

Ramez Younis Grade 10 History How did Stalin gain power and initially dispose of his opposition? The Rise of The Beast When Lenin died in 1924 there would be no leadership election. The communist party did not work that way; the leader would be the person to show most power. The two figures that struggled to power the most to succeed Lenin were Joseph Stalin and Leon Trotsky. After the 1917 revolution, Stalin was already a member of the Central Soviet Committee since 1912. Stalin was an old Bolshevik. He came from a poor background but wasn't an intellectual, full of fine phrases and good vocabulary that made him popular with some communists. Trotsky was very much different, he came from a middle class family and was intelligent and an excellent political thinker. He wanted to change the face of Russia, but the problem was that he only became a Bolshevik in 1917. On Lenin's death, Stalin, Kamenev and Zinoviev formed a triumvirate of successors, allied against Trotsky. ...read more.

The NEP would allow certain level of private enterprise. It was also suppose to reduce the suffering of the peasants and stabilize the economy. Members of the right wing wanted to retain the NEP because they thought the economy was still too fragile. The left wing that included Trotsky, wanted the NEP scrapped because they believed it went against communist theories. Stalin's position wavered depending on the political Situation. The NEP continued until 1928 with some clear success until Stalin reversed this policy and ordered for collectivization of agriculture and the five-year plan without looking at the farmers who had risen to prosperity under the NEP. He wanted to industrialize the country and the only industrial progress could come from agriculture. This would therefore allow the USSR to compete economically with the rest of the world. Trotsky who was the front-runner to succeed Lenin had the support of the army. He had been triumphant in the Civil War. ...read more.

He wanted to get rid of the wild excesses of Trotsky. Only then people started to notice the damage caused by the Civil War and how much was needed to be fixed. They should concentrate on building a socialist country. His plans in agricultural would loose the gains of the revolution. Stalin was also clever and he planned for power very carefully. He got a good start at Lenin's funeral. He took a lot of positions in the party to put his own supporters into good posts. He new with whom to side with. Most historians tend to agree that Stalin's appointed of his supporters to key positions within the state was a major factor to his rise of complete power of Russia. The Bolshevik party was the second major factor to drive him to dictatorship. The party itself placed Stalin in a position where he could make his appointments. They also ignored Stalin's growing to power leaving him to gain control of "al the levers of power". As a result, he proved to be immoveable when the party eventually tried to remove him from office in the 1920's. Lenin and Stalin Zinoviev ...read more.