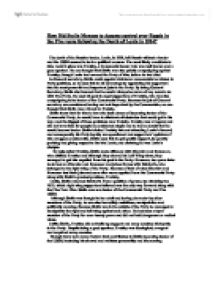 How Did Stalin Manage to Assume control over Russia in the Five years following the Death of Lenin in 1924?

How Did Stalin Manage to Assume control over Russia in the Five years following the Death of Lenin in 1924? The death of the Russian leader, Lenin, in 1924, left Russia without a leader and the USSR seemed to be in a political vacuum. The most likely candidate to take Lenin's place was Trotsky, a Communist leader who was well known and a good speaker. No one thought that Stalin was also quietly campaigning against Trotsky, though Lenin had warned the Party of him, before he had died. As General secretary, Stalin could appoint whichever communists he wished to Party positions, so he used this to his advantage by appointing his supporters into the most powerful and important jobs in the Party. ...read more.

Trotsky was arrogant, and did not have time for people he considered stupid and he had no doubt that he would become leader. Stalin tricked Trotsky into not attending Lenin's funeral, and consequently his Party loyalty was questioned and supporters' opinions of him dropped considerably. Stalin used this to gain public support, by greatly praising and giving respect to the late Lenin, and claiming he was Lenin's disciple. To help defeat Trotsky, Stalin made alliances with Zinoviev and Kamenev, who disliked Trotsky and although they shared his Left Wing views, they managed to get him expelled from his post in the Party. However, two years later he turned on Zinoviev and Kamenev and joined forces with Bukharin, who belonged to the right wing of the Party. ...read more.

Because Stalin was in the middle of the Party he managed to manipulate the right and left wing against each other. He had been a loyal member of the Party for over twenty years and did not hold dangerous or radical views. Unlike Stalin, Trotsky did not build up support and many doubted his loyalty to the Party. Despite being a good speaker, Trotsky was ideological, arrogant and acquired many enemies. Though there were many factors that contributed to Stalin becoming leader of the USSR, including his shrewd and ruthless personality and his cunning political tactics, I believe his position of General Secretary in the Party was the main factor that lead to Lenin becoming leader of The USSR. This seemingly unimportant post, gave Stalin a vast amount of control over the Party, and making it possible to take complete control. ...read more.