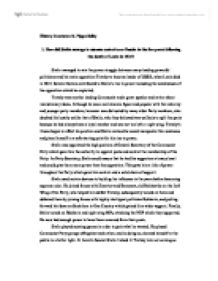 How did Stalin manage to assume control over Russia in the five years following the death of Lenin in 1924?

History Coursework- Pippa Selby 1. How did Stalin manage to assume control over Russia in the five years following the death of Lenin in 1924? Stalin managed to win the power struggle between many leading powerful politicians and his main opposition Trotsky to become leader of USSR, when Lenin died in 1924. Several factors contributed to Stalin's rise in power including the weaknesses of his opposition which he exploited. Trotsky was another leading Communist and a great speaker and writer about revolutionary ideas. Although he was a well-known figure and popular with the red army and younger party members, however was distrusted by many older Party members, who doubted his loyalty unlike that of Stalin, who they believed was unlikely to split the party because he had always been a loyal member and was not too left or right wing. ...read more.

Stalin used certain devices to build up his influence in the years before becoming supreme ruler. He joined forces with Zinoviev and Kamenev, old Bolsheviks on the Left Wing of the Party, who helped him defeat Trotsky, subsequently turned on them and defeated them by joining forces with highly intelligent politician Bukharin, and putting forward his ideas on Socialism in One Country which gained him wider support. Finally, Stalin turned on Bukharin and right wing MPs, attacking the NEP which they supported. He now had enough power to have them removed from their posts. Stalin played cunning games in order to gain what he wanted. He played Communist Party groups off against each other, and in doing so, showed himself to the public in a better light. ...read more.

Stalin knew precisely what he wanted and was determined to succeed and therefore his frame of mind had a great deal to do with his progress. Although overcoming Trotsky allowed Stalin to continue his rise to power safely, the fact that he had the position of Party Secretary meant he could control how the party worked to some extent and could easily build up his power by ensuring he had a strong link of supporters inside the Party. Without Stalin's position of General Secretary for the Communist Party it would have been extremely difficult for him to win the power struggle between himself and other politicians and build up his power to such an extent that enabled him to assume complete control over Russia in 1929. I therefore think this was the biggest reason for his success. ...read more.