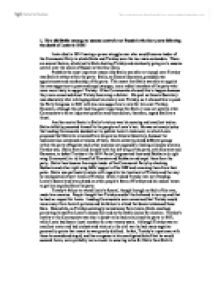 How did Stalin manage to assume control over Russia in the four years following the death of Lenin in 1924?

1. How did Stalin manage to assume control over Russia in the four years following the death of Lenin in 1924? Lenin died in 1924 leaving a power struggle over who would become leader of the Communist Party in which Stalin and Trotsky were the two main contenders. There are several factors, which led to Stalin beating Trotsky and eventually going on to assume control over the whole of Russia within four years. Probably the most important reason why Stalin was able to triumph over Trotsky was Stalin's status within the party. Stalin, as General Secretary, presided over appointments and membership of the party. This meant that Stalin was able to appoint his own supporters to posts and expel younger, more radical members of the party who were more likely to support Trotsky. Other Communists allowed this to happen because they were concerned about Trotsky becoming a dictator. His post as General Secretary was absolutely vital in bringing about his victory over Trotsky, as it allowed him to pack the Party Congress in 1924 with his own supporters to vote for him over Trotsky. ...read more.

Stalin was particularly astute with regard to his treatment of Trotsky and the way he manipulated others' views of Trotsky. Stalin tricked Trotsky into not attending Lenin's funeral and later played on other people's fears of Trotsky and his radical views to get him expelled from the party. Trotsky's failure to attend Lenin's funeral, though through no fault of his own, made him enemies. People thought that Trotsky couldn't be bothered to turn up and that he had no respect for Lenin. Leading Communists were concerned that Trotsky would move away from Lenin's policies and his failure to attend the funeral enhanced these fears. Meanwhile, as Trotsky seemingly moved away from Lenin, Stalin was busy promoting himself as Lenin's chosen heir and as the stable choice for election. Trotsky's loyalty to the Communists was also in doubt as he had only joined the party in 1917, while Lenin had been a loyal member for over twenty years. Although Trotsky was an excellent orator and had orchestrated victory in the civil war he had many negative personality points that meant he was greatly disliked. ...read more.

The right wing of the party wanted to move more slowly towards Communism and supported the NEP as a means of moving forwards. Stalin used his great astuteness to play off one faction of the party against another. This is a factor that would have been irrelevant if Stalin's great slyness had not enabled him to exploit this party divide to his advantage; even without this divide, given other factors, Stalin would probably have won anyway. All these factors interrelated to enable Stalin to become undisputed leader of Russia in 1929. His position as General Secretary was his power base and enabled him to pack the party with his supporters. His shrewdness and tactics allowed him to get rid of his opposition and also allowed him to cause fighting within the party to his advantage, his dull exterior meaning that while doing these things he was never seen as being a threat to anyone else. Stalin was supported as the more middle-of-the-road Communist, in comparison to Trotsky, and all the above factors worked together to bring about his victory. ...read more.