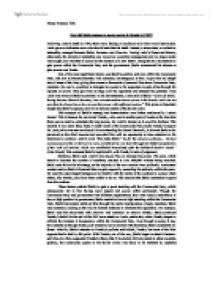 How did Stalin manage to secure power in Russia by 1929?

How did Stalin manage to secure power in Russia by 1929? Following Lenin's death in 1924, there was a feeling of confusion as to who would lead Russia. Lenin gave no indication as to who should lead after his death. Instead, a triumvirate, or collective leadership, emerged between Stalin, Kamenev and Zinoviev. During Lenin's illness and directly afterwards, the collective leadership was viewed as a practical arrangement and no single leader was sought, nor was there a layout for the election of a new leader. Using this as a foundation to gain power within the Communist Party and the government, Stalin commenced his scheme to gain power over Russia. One of the most significant factors was Stalin's position and role within the Communist Party. His role as General Secretary was extremely advantageous to him. It gave him an insight into all areas of the Party giving him access to thousands of personal files about Communist Party members. He was in a position to delegate key posts to his supporters to gain allies through his exploits of power. This gave him an edge over his opponents and stressed his potential. Even Lenin was aware of Stalin's potential. In his last testament, Lenin said of Stalin: "Comrade Stalin, having become General Secretary, has concentrated enormous power in his hands: and I am not sure that he always knows how to use that power with sufficient caution." This gives an important insight into Stalin's capacity and will to become leader of the Soviet Union. ...read more.

By suggesting an end to one of Lenin's policies, Stalin accused Trotsky of going against Lenin. [ik1]It also helped to remove Zinoviev and Kamenev. Having become increasingly cautious of Stalin, they had gone over to Trotsky's side and so Stalin was able to tarnish their reputation by raising doubt over their intentions. Once the left wing opposition had been removed, Stalin turned to the right wing opposition. Once again, the NEP was the defining issue, but this time, Stalin did a u-turn in his political beliefs. The majority of the right supported NEP, but Stalin now decided that NEP was inappropriate. He claimed that because of the Kulaks, the NEP had become unsuccessful and should therefore go. This is because Stalin felt that the Kulaks were putting their individual welfare before those of Russia on a whole, and that they supported Capitalism. The right wing, such as Bukharin, was accused of wanting to "increase the power of Kulaks...and hence frustrate the introduction of Socialism in the countryside." (H. Shukman, 1999). In this way, Stalin had used the NEP debates to isolate his main competitors for power within the Communist Party. The conflicts over NEP were broadened because of the different viewpoints towards it. During the power struggle between Trotsky and Stalin, the ideological rift between the two began to deepen as their opposing views came into conflict. Theoretically, Trotsky's call for "Permanent Revolution" seemed ideal. It complied with Marx's theory of international and world revolution as a means of spreading communism, but in reality it was unfeasible. ...read more.

The ideological view credits Stalin's rise as being for practical and ideological incentives and not personal ambition. Historians such as E.H. Carr believe this was the primary reason for Stalin's yearn for power. Historians who accept this approach underline that the struggle between Stalin and Trotsky was caused by conflicts over the future direction of the revolution. According to C. Ward, "the general secretary [Stalin] was not so much an opportunist as a practical politician balancing between extremes." For instance, they believe that Stalin's attack on Trotsky's belief of "Permanent Revolution" could be seen merely as the actions of a practical politician who was concerned about the possibility of the Soviet Union becoming involved in a war it was ill equipped to fight, rather than that of a manipulative member of government. Though his personality could be seen as the most significant factor, other circumstances aided his rise to power. Through a combination of his determination and ruthlessness, his attacks on the opposition's flaws, he was able to take advantage of his position the Communist Party. The economic and political confusion left by Lenin's death and the civil war allowed him to gain support in the Politburo and Central committee. Taken into consideration with his appealing ideology, this gave him an edge over his opponents. Therefore, by 1929, Stalin was able to convince the Communist Party that he was the appropriate figure to take control of Russia. As pointed out a fellow Party member, "he was a man whose aim was very clear...he accomplished it in the most convincing way...and he allowed nothing to get in his way. ...read more.