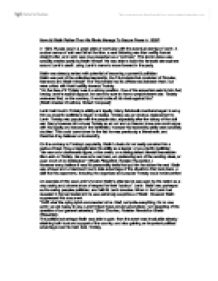 How did Stalin Rather Than His Rivals Manage To Secure Power In 1929?

How did Stalin Rather Than His Rivals Manage To Secure Power In 1929? In 1924, Russia was in a great state of confusion with the eventual demise of Lenin. A sudden sense of void was felt at the time, a vast following was then swiftly formed straight after, and Lenin was now presented as a "cult hero". This iconic status was actually created partly by Stalin himself. He was able to build this fantastic atmosphere around Lenin's death, using Lenin's name to move forward in the party. Stalin was already ranked with potential of becoming a powerful politician. Stalin was part of the collective leadership, the Triumvirate that consisted of Zinoviev, Kamenev and Stalin himself. The Triumvirate had its differences between them, but were united with their hostility towards Trotsky. "On the face of it Trotsky was in a strong position. One of his supporters said to him that, having Lenin's explicit support, he was now sure to have a preponderant role. Trotsky answered that, on the contrary, it would unite all his rivals against him". (Stalin breaker of nations, Robert Conquest) ...read more.

Just as Stalin tried to portray himself as the heir to Lenin as leader, he similarly tried to elevate himself as the only orthodox Leninist when it came to political debates. When Lenin introduced the NEP in 1922, it was never to last. Lenin however was very unclear about an actual date it would all end. Proposed as a financial incentive to try boosting the economy in Russia, it was only temporary as it was an aspect of capitalism. It was never a policy to be retained. "Lenin had uttered contradictorily remarks about the NEP, not making it clear whether it was only meant to provide breathing space or whether it would continue for a long time. In any case the NEP became both impractical and politically unacceptable." (Stalin, Harold Shukman) The fact no date was mentioned, it added incredibly to the ambiguity of the situation where Stalin took full advantage. The NEP, created a huge conflict between the Left and Right. Bukharin (Right) believed the NEP should remain, as it was a runaway success, as it created jobs, and economic stability. Trotsky who represented the Left wanted it to end as soon as possible, he was not against the policy as it already had been a success it should now end. ...read more.

This is where Stalin's working class background helped Stalin gain almost absolute support from the party. "Most of them came like Stalin himself, from very humble back grounds and have received little formal education. Mistrusting intellectuals such as Trotsky, they preferred to place their trust in Stalin's wisdom... when it came to matters of ideology."(Orlando Figes, A People's Tragedy, The Russian Revolution 1891 -1924) Stalin succeeded in the Ideological debate, this could be seen as both Stalin's strength as a politician or even challenge the whole ideal of Permanent revolution. Stalin won the ideological debate claiming he believed in the concept of "Socialism in one country" beyond doubt. Fitzpatrick confirms this as she states "Stalin, by contrast, took the position that was simultaneously patriotic and practical: the Soviet Union had no desire to beg favours from the Capitalist West." The historian Brezezinski however contradicts this view, he is not concerned about the figures involved, he believes it was the whole outlook of permanent revolution which was flawed from the very beginning, "Trotsky offended the instinct for self-preservation of the newly entrenched party bureaucrats, who were not prepared to risk all on the altar of a premature world revolution." ...read more.