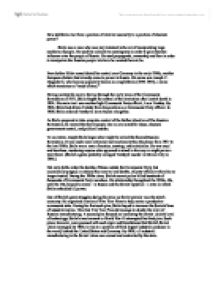 How did Stalin rise from a position of relative insecurity to a position of absolute power? Stalin was a man who was very talented in the art of manipulating large numbers of people. He used his calculative cunningness in order to gain absolute influence over the people of Russia. He used propaganda, censorship and fear in order to manipulate the Russian people into how he wanted them to be. Even before Hitler consolidated his control over Germany in the early 1930s, another European dictator had already come to power in Russia. His name was Joseph V. Djugashvili, who became popularly known as Joseph Stalin (1879-1953), a name which translates as "made of steel." Having worked his way to the top through the early years of the Communist Revolution of 1917, Stalin fought for control of the revolution after Lenin's death in 1924. His main rival was another high Communist Party official, Leon Trotsky. By 1926, Stalin had driven Trotsky from his position as a Communist Party official. In 1929, Stalin ordered Trotsky to leave Russia altogether. As Stalin prepared to take complete control of the further direction of the Russian Revolution, he moved the Soviet people into an era noted for abuse, absolute government control, and political murder. ...read more.

From Grolier Online: Stalin rose to power because he embodied, perhaps more than any of his old colleagues, a new spirit. His colleagues, most notably the brilliant, individualistic Trotsky, who had thrived during the days of storm and stress, were unfitted for the office politics, the patient calculation, and the compromise required to operate a growing bureaucratic regime. Stalin, though unimpressive physically and a man of restless, emotional, vain, cynical, and often vindictive temperament, had internalized so profoundly the role of administrator that he projected everywhere in public (in imitation of Lenin) a humble air, simple dress, personal asceticism, calmness, efficiency, and fatherliness--qualities that appealed to his colleagues, to the public, and, perhaps most important of all, to the new generation of party functionaries of humble origin flooding the party in the 1920's. Stalin was also careful to back the most popular solutions to the many problems hotly debated in the 1920's, including Lenin's principles of one-party government and internal party unity, the restoration of normal diplomatic relations, and moderate policies for the development of Soviet industry and agriculture. His theory of "socialism in one country", which asserted the possibility of building a complete Communist system in one country, contradicted traditional Marxist internationalism. ...read more.

In the face of the growing threats from Nazi Germany and Japan, Stalin reverted increasingly to traditional forms of foreign policy, seeking diplomatic alliances with the European powers. Finally, in August 1939, he concluded a bilateral nonaggression treaty with Hitler Although Hitler and Stalin hated each other, the two leaders were similar in many ways. Hitler and Stalin each rose to the highest position attainable in their respective countries, and there were three main reasons that they were able to do this. Both men were skilled users of propaganda, each was amoral, and they both had the ambition to make their countries powerful in the world. Since each was a skilled user of propaganda, they could use their words to twist and manipulate the minds of people into believing that what they were saying was the absolute truth. Using this power, they would get people to do anything for them, which proves their amorality. Since their countries were still trying to recover from World War I, they desired to restore the power back in to their countries. These three reasons will prove that Hitler and Stalin were similar in many ways. ...read more.