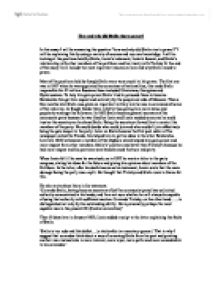 How Did Stalin Rise To Power?

How and why did Stalin rise to power? In this essay I will be answering the question "how and why did Stalin rise to power?" I will be explaining this by using a variety of sources and my own knowledge. I will be looking at the positions held by Stalin, Lenin's testament, Lenin's funeral, and Stalin's relation ship with other members of the politburo and his rivalry with Trotsky At the end of the essay I will include the most important reasons on how and why Stalin raised to power. Most of the positions held by Joseph Stalin were very crucial to his power. The first one was in 1917 when he was appointed the commissar of nationalities; this made Stalin responsible for 65 million Russians these included Ukrainians, Georgians and Byelorussians. To help him gain power Stalin tried to persuade those to become Bolsheviks this got him respect and notoriety by the people out side of Moscow. Then a few months later Stalin was given an important military role he was in command of some of the red army, he fought beside them in battle thus giving him more status and popularity amongst his followers. ...read more.

That is why I suggest that comrades think about a way of removing Stalin from his post and pointing another man instead who is more tolerant, more loyal, more polite and more considerable to his comrades.' Now in1924, something happened which made Stalin's position look suddenly very weak, Lenin's testament was read out in the central committee spreading anger and shock through out. One eye witness stated: 'Terrible embarrassment paralyzed all those present...Stalin sitting on the steps of the restroom looked small. I studied him closely, in spite of his self control and show of calm. It was clearly evident his fate was at stake.' Zinoviev and Kamenev saved Stalin buy trying to avoid embarrassment of Stalin buy not publishing the letter in the Russian papers, so most of the Russians never got to no what Lenin really thought. Lenin's funeral was an opportunity for Stalin to gain power and respect. Lenin died in 1924 on the 21st of January. Stalin turned up at Lenin's funeral and made various speeches and mourning letting people know of his loyalty to Lenin's ideas. He also had Lenin's body put in a marble tomb on display in red square and dressed in smart clothing. ...read more.

In the argument with Trotsky, Stalin took the side of the rightists, not because he agreed with NEP because he wanted help to get Trotsky, Zinoviev and Kamenev out of the Politburo. But with the rightist he always made sure Trotsky was out voted. He even made his supporters boo at him in public meetings. Then at the end of 1925 Stalin's position in the politburo was increases when the party congress voted three of his friend in place of Trotsky, Zinoviev and Kamenev. So in 1927 Trotsky and his supporters resigned from the Politburo. Trotsky now gone Stalin in 1928 argued against NEP and the rightists. Now his supporters had over powered them and Bukharin and Rykov resigned meanwhile Stalin was exiled from Russia and was now Leader of the USSR. The most important reasons to Stalin's rise to power was him being a general secretary because he used his authority to over through Trotsky and every one else to become leader of the USSR. Also the funeral of Lenin gained him respect and loyalty of the public of Russia to improve his power even more. Stalin could have lost his chances if the testament was published but lucky for him he was put back on track by Zinoviev and Kamenev, giving him his last chance of becoming a leader. ...read more.