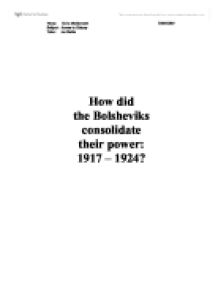 How did the Bolsheviks consolidate their power: 1917 - 1924? " The remarkable feature about November 1917 is the way the Bolshevik leader, Lenin moved to the centre stage of Russian history, a position he maintained until his death in 1924".1 By the early 1920's Russia was in the authoritarian grip of a one party dictatorship. The Communist Party as the Bolshevik's had become. It had a ruthless leadership which was ideologically motivated to hold on to power at any cost. This was a dramatic change from the Bolshevik party's position in 1917 when the party enjoyed widespread support amongst the peasants, workers and soldiers who saw in the Bolshevik's the best hope for popular revolution. By the early 1920's however this had all changed. The Bolshevik's had lost the majority of its popular support after a ferocious Civil War and several economic disasters, political failures and mismanagement. Throughout the period 1917 to 1924 the Bolshevik's tried desperately to consolidate their power and regain control of the Country. Lenin had been in hiding in Finland since July 1917, and then on 23rd October 1917 he returned to Petrograd in disguise. He was convinced the time was right for the Bolshevik's to seize power, due to the civil unrest and disillusionment over the War. ...read more.

Led by the ruthless Felix Dzerzhinsky, the CHEKA was used as the party's police force. Between 1917 and 1922 several hundred thousand victims were arrested, imprisoned, tortured and executed. The CHEKA were imperative to the Bolshevik's hold on power and the Bolshevik's used the organisation to great effect in removing any opposition to their power. Within a few short months of seizing power the Bolshevik's, who from March 1917 had renamed themselves the Communist's were faced with widespread opposition to their regime and Civil War. Their opponents, a mixture of various parties were called the White's. There were three elements that made up the White Armies: The Russian's who opposed Bolshevism, subject nationalities like the Pole's and Ukrainian's who sought independence from Russian control and intervention by foreign powers, Britain, Canada, America and Japan, who were afraid the revolution would spread to other countries and also wanted to recoup businesses they owned but had lost when Lenin nationalised all banks and businesses in the USSR. All those who fought the Communist's were termed the White's whilst the Communist's were known as the Red's. The White Russian contingent was made up of many party's4 opposed to Lenin and at first enjoyed considerable successes, but due to the Red's holding the central industrialised areas with good communications and transport ...read more.

The Bolshevik's displayed a messianistic self-belief that they knew best and once a policy decision was adopted the Bolshevik's followed it through no matter what the cost in human lives. The Bolshevik's saw the continuation of the Revolution and the total Bolshevisation of the Country as their number one priority and human life came second to their ideology. As Graham Darby wrote in his book The Russian Revolution; "They were motivated by utopianism, by a desire to transform the World, by a vision of World Socialism". All this translated into a ruthless determination to hold on to power at all costs. To achieve this the Bolshevik's restored a centralised, elitist, authoritarian Government backed up by force, terror and bureaucratic control over all aspects of Russian life. It was not dissimilar to the old Tsarist system but far crueler. The Bolshevik's had no compunction in shooting thousands of people in their consolidation of power. Thus they did not see themselves as servants of the people but as their teachers. To start with the Bolshevik's enjoyed the support of the majority of the people. Only gradually did they show their true colours as appointments replaced elections, directives and decrees replaced discussions and other party's were eradicated. How the Bolshevik's/Communist's managed to dupe the Russian people and hold on to power is a remarkable achievement, and much of the credit for this must go to Lenin. ...read more.