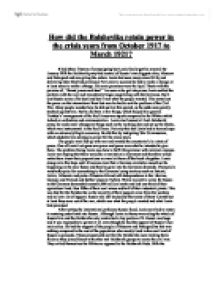 How did the Bolsheviks retain power in the crisis years from October 1917 to March 1921? It had taken 13years of campaigning but Lenin finally got his reward. By January 1918 the Bolshevik party had control of Russia's two biggest cities, Moscow and Petrograd and was giving the orders. Lenin had seen many rulers fall by not delivering what they had promised. For Lenin to succeed he had to make a change or at least seem to make a change. His main promises were the April Thesis with the promise of, "Bread, peace and land." As soon as he got into power Lenin settled the problem with the war and immediately began negotiating with the Germans. But it cost Russia some of its best land but it was what the people wanted. This sorted out the peace on the international front but now he had to sort the problem of the Civil War. Many people wonder how he did survive this period, as the odds were greatly stacked against him. But he did have a few things, which helped him greatly. Trotsky's' management of the Red Army was superb compared to the Whites which lacked co-ordination and communication. Lenin also banned all Anti-Bolshevik press; he made small changes to things such as the working day and set up the Cheka, which was instrumental in the Red Terror. Not only this but Lenin had to try and cope with an extremely fragile economy. He did this by instigating War Communism, which added to him staying in power for the crisis years. ...read more.

Just because they were unorganised it does not mean that the Whites were pushovers so they needed a force to protect them. Trotsky was the genius who arranged a much better army than the Whites using his internal lines of communication. It was called the Red army and Trotsky employed 25,000 Ex-Tsarist officers, a risky option. However they maintained their loyalty because their families were being held hostage and killing deserters. This was very similar to the Red Terror, which was spreading around the country. Lenin set up the Cheka, the Russian secret police that had the job of killing any Counter Revolutionaries or spies that they cam across. By contrast, the Cheka, within three years of establishment, had a strength of 250,000 full-time agents... By 1918-19 the Cheka was averaging 1,000 executions a month for political offences alone.1 Although this treatment was in many ways cruel and irrational it did prove to be very effective in disciplining the Red army. The Cheka was employed to carry out executions and brutal punishments on al who did not agree with his ideas, this was the Red Terror. Lenin did not see anything wrong with terror and he saw it as the only way of instigating the law and order he wanted. As early as 1901 Lenin was quoted as saying we have never renounced terror and cannot renounce it. It worked very well making more people scared of the Cheka and the Red army than they were of the Whites. ...read more.

I think Lenin knew that the promises he had made would not all be fulfilled, but he had also seen what had happened to leaders before him and could see himself sliding down the same slope. But Lenin was determined to succeed, and such was his character that he was prepared to do whatever it takes to cling on to his power by using savage force. Lenin must not take all the credit as Trotsky played a huge part in keeping the Bolsheviks in power organising the Red army, which beat a force much bigger than them and was fighting on seventeen different fronts. But Lenin was still the central man when it came to wiping out all the other political parties which was crucial to their survival. Lenin's economic reshuffle changed the face of the civil war as war communism although it was unpopular served its purpose at the time and kept the supplies running through to the front line. This was like many of Lenin's policies as it was hated but it did its job. This made the Bolsheviks hated by a lot of people so if they let the terror and ruthlessness down they would rise up against them. So Lenin had to find a way to let the Red terror die down without letting the people rise up. This was something that had to be sorted out by someone else because Lenin was having many strokes and was not expecting to last long. 1 Paul Johnson page three, first column bottom of paragraph two ...read more.