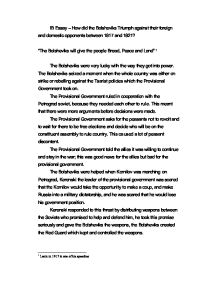 How did the Bolsheviks Triumph against their foreign and domestic opponents between 1917 and 1921?

Kerenski responded to this threat by distributing weapons between the Soviets who promised to help and defend him, he took this promise seriously and gave the Bolsheviks the weapons, the Bolsheviks created the Red Guard which kept and controlled the weapons. Kornilov�s army was starting to desert and this leaving him with no troops and with only fleeing as an option. Kerenski now faced an even bigger problem the Red Guards who held a vast arsenal of his weapons, the problem that he had basically signed his death warrant. Kerenski was now in a very delicate situation. One night the Red Guards took over many strategic points over Petrograd. The next morning Kerenski woke up with most of Petrograd occupied by the Red Guards. ...read more.

Lenin to get to power took a very big risk in say that the power should be given to the soviets, when he said this the Bolshevik party didn't even have a majority in any Soviet. He then came slowly to power, and only in September 1917 did the Bolsheviks have a majority in the soviets. Lenin to make clear that Russia wouldn't return to the war agreed to the terms of the treaty of Brest-Litovsk. Lenin had at his disposal nearly all the crowns assets, he used these assets to create his image as a leader, serious, disciplined person. All this wasn't enough for Lenin and the Bolsheviks to be happy, because they had gathered many enemies on there climb to power. 1 Lenin in 1917 in one of his speeches ...read more.