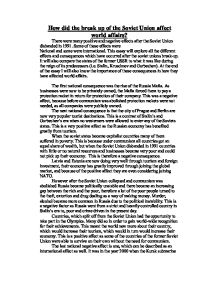 How did the break up of the Soviet Union affect world affairs?

How did the break up of the Soviet Union affect world affairs? There were many positive and negative effects after the Soviet Union disbanded in 1991. Some of these effects were National and some were international. This essay will explore all the different effects and consequences which have occurred after the soviet unions break-up. It will also compare the states of the former USSR to what it was like during the reign of its predecessors (i.e. Stalin, Kruschnev and Gorbechev). At the end of the essay I will also know the importance of these consequences in how they have affected world affairs. The first national consequence was the rise of the Russia Mafia. As businesses were now to be privately owned, the Mafia forced them to pay a protection racket in return for protection of their company. This was a negative affect, because before communism was abolished protection rackets were not needed, as all companies were publicly owned. The next national consequence is that the city of Prague and Berlin are now very popular tourist destinations. ...read more.

The last national negative affect is one, which can be described as an international affect as well. It was in the year 2000 when the Kursk submarine became stuck on the bottom of an ocean, although the west were willing to help save the men on board, Russia refused. This showed that Russia still did not completely trust the west and relations between Russia and the west were not completely resolved. This showed a similarity between the present day and the time in Gorbechev's era, when the Soviet Union still existed, as it made the west suspicious in thinking about what the Russians had to hide on that submarine. The first international consequence was, what was Russia to do with all its nuclear weapons. When the Soviet Union disbanded all the nuclear weapons, which were made in the arms race, were not needed anymore. The government began to destroy its weapons, but a few could not be tracked down. There are fears that people like the Russian Mafia got hold of some of these weapons, and sold them to countries like Iraq and Libya. ...read more.

Although the break-up of the Soviet Union did dramatically affect world affairs not everything in Russia has changed, Russia still expels diplomats for spying and still has suspicions about the west as is evident in the Kursk submarine accident. The west also do not completely trust the Russians either, and until trust is established there will never be a good relationship between the two. The break up has also had a negative and positive affect in both national and international affair. As a nation the USSR has benefited, by all the countries being given the right to govern themselves, but in Russia itself the break up has led to an increase in crime and the rise of the Russian Mafia. Internationally the break up has given the UN a more power in how to set guidelines for all nations, and has changed Nato's role for the better. However the break up has also led to an increase in terrorism and an increase in the nuclear weapons black market. Over all, the break up of the Soviet Union has changed the world dramatically, some of the changes were positive and some were negative. ...read more.