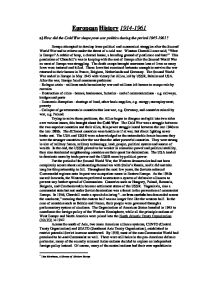 European History 1914-1961 a) How did the Cold War shape post-war politics during the period 1945-1961? Europe attempted to develop from political and economical struggles after the Second World War and to reform under the threat of a cold war. Winston Churchill once said, "What is Europe? A rubble of heap, a charnel house, a breeding ground of pestilence and hate"1 This pessimism of Churchill's was in keeping with the rest of Europe after the Second World War as most of Europe was struggling. The death camps brought enormous loss of lives as many Jews were tortured and killed. Those Jews that remained fortunate enough to survive the war returned to their homes in France, Belgium, Netherlands and Germany. The Second World War ended in Europe in May 1945 with victory for Allies, led by USSR, Britain and USA. After the war, Europe faced enormous problems: - Refugee crisis - millions made homeless by war and millions left homes to escape rule by enemies - Destruction of cities - homes, businesses, factories - and of communications - e.g. railways, bridges and ports - Economic disruption - shortage of food, other basic supplies, e.g. energy; unemployment; poverty - Collapse of governments in countries that lost war, e.g. ...read more.

In the wake of unilateral measures in Eastern Europe, the alliances fell apart due to political disputes. The conference was affected by the developing mistrust between Western allies and the Soviet Union. Stalin demanded territories of Germany, Russia, Romania and Czechoslovakia; strategically he also wanted parts of Turkey. The ideological abyss, which until then been concealed and disregarded or minimized by the Western nations, was too deep and had to explode. When the Soviet Union became suspicious of Eastern Europe intentions Truman eliminated them from the list of eligible nations for U.S loans. The United States was content during the closing months of the war and the first months of the post-war period they managed to preserve some advantages when they emerged from the war. Before his death, Roosevelt had overturned himself on Germany, instead of going forward with either the ''Morgenthau Plan'' or other plans for the dismemberment of Germany, he and Churchill refused to commit themselves ''to Russian proposals for Germany" that would unavoidably magnify Soviet power in Europe. In May, acknowledging Germany's surrender to the USSR, Stalin himself proclaimed that the Soviet Union did not intend ''either to dismember or to destroy Germany." ...read more.

Other political accomplishments during 1945-1961, the women's right to vote in France as the vast majority of French women and men voted against the return of the Third Republic as their political institution on October 1945. Italy became a republic state in June 1946, half of the votes despite the pope's influence elected for a governmental system rather than domination by the monarchy. With a considerable amount of U.S finical assistance the Italian government managed to economical grow rapidly through policies of non-intervention. In the 1960s, the Italian government implemented social reforms with the help of the church that revived its long-dormant social doctrine. After the death of Stalin, the democratic system in the USSR continued under the governing of communist parties. Ethnic Russians dominated the communist parties and authority over the republics remained in their hand. They was censorship over published criticisms on Soviet governmental management and this restriction ended when the new party came into control. Filmmakers, artists and writers became daringly imaginative within the boundaries of official toleration. Political struggle played a major role during the post-war era as each state faced difficult conflicts with revolts and potential governmental threats. In Europe, the cold war brought about a new threat of mass distraction weapons as the race was on for the first invented weapon. Politically individual states gradually emerged with a more democratic political system towards the 1960s. ...read more.