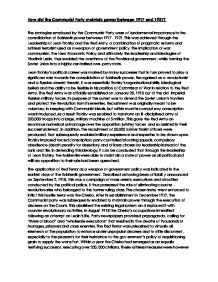 How did the Communist Party maintain power between 1917 and 1921?

How did the Communist Party maintain power between 1917 and 1921? The strategies employed by the Communist Party were of fundamental importance in the consolidation of Bolshevik power between 1917- 1921. This was achieved through the Leadership of Leon Trotsky and the Red Army, a combination of pragmatic reforms and ruthless terrorism used as a weapon of government policy. The implication of war communism, the New Economic Policy and ultimately the leadership and ideologies of Vladimir Lenin, thus enabled the overthrow of the Provisional government, while forming the Soviet Union into a highly centralised one-party state. Leon Trotsky's political career was marked by many successes that in turn proved to play a significant role towards the consolidation of Bolshevik power. Recognised as a revolutionist and a Russian Marxist theorist, it was essentially Trotsky's organisational skills, ideological beliefs and the ability to be flexible in his position of Commissar of War in relation to the Red Army. The Red Army was officially established on January 28, 1918 out of the old Imperial Russian military forces. Its purpose at the outset was to defend the Soviet Union's frontiers and protect the Revolution from its enemies. ...read more.

The Red Terror was unleashed to virtually all elements of the population to enforce under unpopular decrees and to stifle discontent, especially to the peasants for their resistance to the government's policy of requisitioning grain to supply the war effort. Within a year the Cheka had emerged as an equally terrifying successor, executing over 200, 000 civilians. These ruthless measures were however successful in quenching open hostility. It led to a gain in support for the Bolshevik party that thus authorized a consolidation of power. War Communism destroyed the old ruling elite, fulfilled the promises contained in the Bolshevik Party program and was ideologically progressive. Adopted in June 1918, it can be defined as a term for the economic and social policies that existed in Soviet Russia during the civil war. According to Lenin some of these policies were ideologically inspired and designed to develop a state-managed socialist economy, which the regime portrayed as being the first step towards Communism. Others were pragmatic responses to the pressing economic issues. The policies thus entailed requisitioning of agricultural products, nationalisation of industry, state control of all trade, along with the central control of production and distribution. ...read more.

In the countryside grain requisitioning was abolished and peasants could once again sell their surplus crops in the marketplace for profit. While many Communist supporters opposed the new policy, Lenin justified NEP as a short term compromise of ideology aimed at a long term realisation of that ideology. Subsequently the New Economic Policy established a measure of stability to the economy. It allowed Soviet civilians to recuperate from years of war, civil war, and governmental mismanagement, while further empowering the Bolsheviks to maintain a state of power in the Soviet Union. It can be concluded that the Communist Party had survived severe challenges to its authority, however despite these issues the Bolsheviks were enabled to maintain power throughout the years of 1917-1921. This was achieved through a combination of pragmatic social and political reforms. The Leadership of Leon Trotsky and the Red Army, the enforcement of obedience by strict control over their ideologies was made vigilant by the Cheka, along with the introduction of War Communism and the New Economic Policy. In the Bolsheviks attempt to consolidate power, they were however ultimately forced to compromise the Communist ideology, leading them far from their original aspirations. By Emma Brookes ...read more.