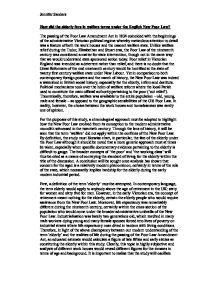 How did the elderly fare in welfare terms under the English New Poor Law?

How did the elderly fare in welfare terms under the English New Poor Law? The passing of the Poor Law Amendment Act in 1834 coincided with the beginnings of the administrative Victorian political regime whereby meticulous attention to detail was a feature of both the work houses and the nascent welfare state. Unlike welfare relief during the Tudor, Elizabethan and Stuart eras, the Poor Law of the nineteenth century was considered a matter for state intervention, though not in the same way that we would understand state sponsored action today. Poor relief in Victorian England was intended as a deterrent rather than relief, and there is no doubt that the Great Reformers of the mid nineteenth century would be horrified at the state of twenty first century welfare state under New Labour. Yet in comparison to both contemporary foreign powers and the march of history, the New Poor Law was indeed a watershed in British social history, especially for the elderly, infirm and destitute. Political mechanisms took over the helm of welfare reform where the local Parish used to constitute the main official authority pertaining to the poor ('out relief'). Theoretically, therefore, welfare was available to the entire population - old, young, male and female - as opposed to the geographic sensibilities of the Old Poor Law. In reality, however, the choice between the work houses and homelessness was rarely one of opinion. For the purposes of this study, a chronological approach must be adopted to highlight how the New Poor Law evolved from its conception to the modern administrative monolith witnessed in the twentieth century. Through the lens of history, it will be seen that the term 'welfare' did not apply within the confines of the New Poor Law. By definition, the study must likewise chart, in particular, the fate of the elderly under the Poor Law although it should be noted that a more generic approach must at times be taken, especially when specific documentary evidence pertaining to the elderly is difficult to gauge. ...read more.

The enduring historiographical invisibility of older people has been in stark contrast to their growing physical presence. From the mid sixteenth century to the late nineteenth century, fewer than 10 per cent of the English population was aged over sixty; in 1901 for instance 8.1 per cent of people were aged sixty and above. Yet by 1941 more than 14 per cent of the population in England was aged over sixty, a figure which had risen to 20.7 per cent by 1991." Figures for employment are more tangible; these are the men and women who avoided the work houses. Phillipson (1982:9) ascertains that 73% of the male population recorded in the census as aged over sixty five were recorded as having an occupation in 1881. The figures for women are more difficult to gauge as the 'means test' introduced for widowed women clouds attempts at consensus of how many 'elderly' women were in employment, which necessarily affects attempts at charting the number of aged women who were affected by the New Poor Laws. Indeed, as Joan Perkin (1993:144) testifies, the issue of widowed women (which did not necessarily imply 'elderly' widows as the poor quality of health and safety resulted in an epidemic of industrial related male deaths at a relatively young age) was one of the more common features of the realities of the New Poor Law. "Throughout the nineteenth century widows with children formed the largest group of paupers receiving poor relief or entering the workhouse." There is a definite split detectable in the attitude of the British state to the concept of welfare within the context of this discussion. The first period, which we have covered, can be analysed within the broad bracket of the years 1834 to 1870, where the advent of Gladstone's Second Government during the 1880's signified a permanent shift in the role of the state concerning both the poor and the elderly. ...read more.

From this moment on, the aged were classified away from the young unemployed with the key theoretical division made between those fit and able to work and those unable to work but who likewise ought to be funded due to their previous financial contribution to society. Before this important milestone, however, the historian can presume that life for the elderly in the work houses of the New Poor Law during the nineteenth century was atrocious, involving contaminated, squalid living conditions and malnourishment with the increased likelihood of the uncontained spread of disease. These are only the physiological symptoms. The psychological effect of the enforced separation of family and the abandonment of liberty can only be gauged as catastrophic. Together with the poor state of medicine until the latter half of the nineteenth century, the New Poor Law was one of the reasons why life expectancy remained so low. Yet the historian must not become embroiled in the perceived heartlessness of the Victorians. The very idea of social 'rights' was an anathema to policy makers of this epoch where many feared the inherent corruption of the working classes more than the implications of a lack of state action in health and elderly care, as pre eminent social historian E.P. Thompson (1991:837) asserts. "The historical myth, which assumes some medieval social compact between the Church and the gentry, on one hand, and the labourers, on the other, was employed to justify claims to new social rights in much the same way as the theory of Alfred's free constitution and of the Norman yoke had been used to justify the claim to new political rights." Furthermore, as a footnote, contemporary writers must bear in mind the current complexion of the welfare state with continuing scandals being reported concerning the meagre sums upon which the elderly still have to live during the twenty first century. In this way, the question of the elderly and state relief has yet to be properly answered. ...read more.