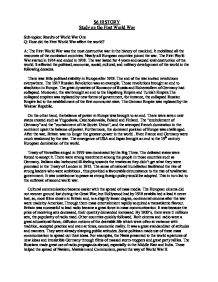 How did the First World War affect the world?

S6 HISTORY Study on the First World War Sub-topics: Results of World War One Q: How did the First World War affect the world? A: The First World War was the most destructive war in the history of mankind. It mobilized all the resources of the combatant countries. Nearly all European countries joined the war. The First World War started in 1914 and ended in 1918. The war lasted for 4 years and caused total destruction of the world. It affected the political, economic, social, cultural, and military development of the world in the following decades. There was little political stability in Europe after 1918. The end of the war incited revolutions everywhere. The 1917 Russian Revolution was an example. Those revolutions brought an end to absolution in Europe. The great dynasties of Romanov of Russia and Hohenzollern of Germany had collapsed. Moreover, the war brought an end to the Hapsburg Empire and Turkish Empire.The collapsed empires was replaced by new forms of government, for instance, the collapsed Russian Empire led to the establishment of the first communist state. ...read more.

Britain was successful to lead radio became a great force in mass communitcation. It was because the price of receiving sets decreased, their quantity demanded increased. By 1930's, there were 2 millions sets, the popularity of radio rised. Other countries quickly followed. Both cinema and radio were a great educational force, diffusion notions of the desirable life which were often at variance with tradition, accepted practice and even at times, economic reality. It was a great standandizer of attitudes and manners. They were already sharping public attitudes. Some politican made use of these mass communication to spread out their ideas. For examples, the Nazis presented to the world a pictures of new ideas and irresistible Germany through films of massed storm-troppers and great party rallies. The Russians made great use of radio propaganda abroad, especially in the Middle East and India. These helped the spread of Nazism, Mazzism and Communism, paved the way of World War II. ...read more.

Mechanized warfare included vehicles powered by gasoline and diesel engines, cannons and machine guns. All of them caused a great number of death and causalties. Tanks and air forces opened up the modern warfare. Tanks were developed by the British and first employed in The First World War in 1916. Chemical warfare included poison gases and other chemical substances. Poison gas was first used in the First World War when the Germans released chlorine gas against the Allies in Apr. 1915. We can see that the military impact of the First World War is far-reaching because it introduced a new kind of warfare. It paved the way for the development of new weapons in the following decades. The scientific discoveries and invention also made the World War Two more destructive than before. As a conclusion, the First World War affected the whole world. The political structure, economic development, cultural and social life of people, and scientific development were all influenced. The war changed the world completely and it also sowed the seeds of the Second World War. We can conclude that the War had a very great influence on the world. ...read more.