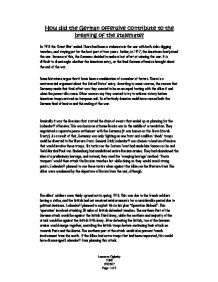 How did the German offensive contribute to the breaking of the stalemate?

How did the German offensive contribute to the breaking of the stalemate? In 1918 the 'Great War' ended. There had been a stalemate in the war with both sides digging trenches, and staying put for the best part of four years. Earlier, in 1917, the Americans had joined the war. Because of this, the Germans decided to make a last effort at winning the war. It is difficult to disentangle whether the American entry, or the final German offensive brought about the end of the war. Some historians argue that it have been a combination of a number of factors. There is a controversial argument about the United States' entry. According to some sources, the reason that Germany made that final effort was they wanted to be on an equal footing with the allies if and when the peace talks came. Other sources say they wanted to try to achieve victory before American troops arrived on European soil. So effectively America could have caused both the German final offensive and the ending of the war. Ironically it was the Russians that started the chain of events that ended up as planning for the Ludendorff offensive. ...read more.

If the Germans managed to capture that, the allies could loose the war, as Amiens was an essential part of the Allies transport network. However the allies had managed to halt another part of the offensive. Operation Mars, was successful initially, but was stopped at Arras. The British defenders there were unyielding and prevented any further German advance. Another blow to the Allied lines was a pair of attacks whose combined force drove the Allies south toward Paris, occupying Soissons and nearly cutting off Reims. The spearhead of their advance penetrated as far as Chateau-Thierry, only 56 miles from Paris. This operation however, suffered from a number of flaws: Ludendorff had not actually planned for this offensive to succeed. This was as it had been intended to be a feint! It would have been used to draw French troops away from the main offensive to the north; as a result the surprising achievements were not exploited because of inadequate reserves. Still, the Allied situation was very worrying for both the commanders and the general public, and an extremely successful counterattack was needed quickly. ...read more.

After that failure, with real U.S. involvement in the war just beginning, it became clear that Germany was set to lose the war. Shortages for the people at home and Germany's industries were one of the factors that worked for the allies. The Germans broke the stalemate because they introduced 'shock' warfare. The influenza pandemic both helped and hindered the Germans. As the allies were severely hit by it the German attacks met with less resistance. However the Germans losses could not be replaced as they now had inadequate reserves. Another fault with the German offensive was the supply line- it really let down their soldiers, as they could not keep up with the advance. The rapid advance also tired the soldiers and when they had to 'dig in' and defend their gain, they lost their 'shock' and the American troops really made the difference. If the Germans had an adequate supply and reserves, some historians believe they could have got to Paris or at least held onto the vast gains of land they had captured. But as they didn't the Americans, by now were pouring troops across the Atlantic, helped the allies' counterattack. Laurence Oglesby 10M5 07/05/07 Page 1 of 3 ...read more.