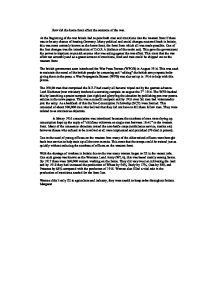 How did the home front effect the outcome of the war?

How did the home front effect the outcome of the war. At the Beginning of the war britain had to poor both men and munitions into the western front if there was to be any chance of beating Germany. Many political and social changes occurred back in britain, this was more comonly known as the home front, the front from which all was made possible. One of the first changes was the introduction of D.O.R.A (defence of the realm act). This gave the government the power to imprison or punish anyone who was acting agenst the war effort. This ment that the war effort ran smoothly and so a grater amount of munitions, food and men could be shipped out to the western front. ...read more.

The 250,00 man that comprised the B.E.F had nearly all became wiped out by the german advance. Lord Kitchener (war minister) itroduced a recruting campain on august the 7th 1914. The WPB backed this by launching a poster campain (see right) and gloryfing the situation by publishing pro-war poems articles in the news papers. This was a sucesful campain and by 1916 over 3m men had volenteredto join the army. As a backlash of this the No-Conscription Fellowship (NCF) were formed. This consisted of about 300,000 men who belived that they did not have to kill there fellow man. They were refered to as conciances objectors. in febury 1916 conscription was introduced becauses the numbers of men were drying up. ...read more.

This ment that the troops could be trained just as quickly without reducing the numbers of officers on the western front. With the shortage of workers in britain due to the war many women began to fill in the vacant jobs. One such groop was known as the Womans Land Army (WLA), this was based mainly aroung farms. By 1917 there were 260,000 women working on the farms. They did very weel at cultivating the land and by 1918 they had incressed the production of Wheat by 54%, Barly by 17%, Oats by 38% and Potatoes by 68% compared with the producton of 1916. Women also filled a vital role in the production of munitions needed for the front line. Women didn't only fill in agriculture and industry, they were needd to keep order throughout britain. Margerat ...read more.