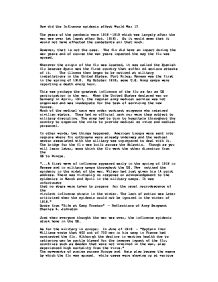 How did the Influenza epidemic affect World War 1?

How did the Influenza epidemic affect World War 1? The years of the pandemic were 1918-1919 which was largely after the war was over (at least after Oct. 1918). So it would seem that it would not have effected the combatants all that much. However, that is not the case. The flu did have an impact during the war years and of course the war years impacted the way the flu was spread. Wherever the origin of the flu was located, it was called the Spanish flu because Spain was the first country that suffered serious attacks of it. The illness then began to be noticed at military installations in the United States. Fort Riley, Kansas was the first in the spring of 1918. By October 1918, some U.S. Army camps were reporting a death every hour. This was perhaps the greatest influence of the flu as far as US participation in the war. ...read more.

There was virtually no response or acknowledgement to the epidemics in March and April in the military camps. It was unfortunate that no steps were taken to prepare for the usual recrudescence of the virulent influenza strain in the winter. The lack of action was later criticized when the epidemic could not be ignored in the winter of 1918." Quote from "Life at Camp Funston" - Reflections of Army Sergeant Charles L. Johnston Just when everyone thought the war was over, the influenza epidemic stuck home in the US. As for the military in europe: In June of 1918 - "Captain Ivor Williams wrote that 600 out of 750 men in his camp in France had contracted the flu. Although the decline in wartime health due to rationing can be partly blamed for the immense impact of the flu, countries such as Sweden that were not involved in the war, also experienced high mortality from the virus." ...read more.

One major question is still unanswered to the satisfaction of some; Is it proper to consider the Influenza pandemic as part of the overall death count for the war, given the important part the war played in its transmission? For most historians, the Spanish flu is not included with information about the war itself but as part of the aftermath of the war when the disease spread through both neutral and warring countries. Perhaps its greatest effect on the First World War had to do with the ending of that war. There is even a chance that the Second World War could have been avoided if it had not been for the flu. President Woodrow Wilson contracted a case of the flu while he was in Paris working out the details of the Treaty of Versailles. It is believed that if Wilson had not been so ill, and bad tempered because of it, the Treaty conditions would not have been so harsh and the Second World War may never had taken place. Much of Hitler's rise to power was based on the German hatred of the excessive penalties of Versailles. ...read more.