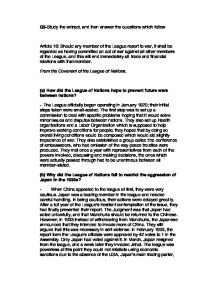 Q5-Study the extract, and then answer the questions which follow Article 16: Should any member of the League resort to war, it shall be regarded as having committed an act of war against all other members of the League, and this will end immediately all trade and financial relations with that member. From the Covenant of the League of Nations. (a) How did the League of Nations hope to prevent future wars between nations? - The League officially began operating in January 1920; their initial steps taken were small-scaled. The first step was to set up a commission to deal with specific problems hoping that it would solve minor issues and disputes between nations. ...read more.

(b) Why did the League of Nations fail to restrict the aggression of Japan in the 1930s? - When China appealed to the league at first, they were very cautious. Japan was a leading member in the league and needed careful handling. In being cautious, their actions were delayed greatly. After a full year of the League's hesitant contemplation of the issue, they had finally presented their report. The Judgment was that Japan had acted unlawfully, and that Manchuria should be returned to the Chinese. However, in 1933 instead of withdrawing from Manchuria, the Japanese announced that they intended to invade more of China. They still argued that this was necessary in self-defense. ...read more.

There was no outlook in Britain and France risking their armies or navies in a war with Japan. Only the USA and USSR had the resources to remove the Japanese from Manchuria by force and they were not even in the League. (c) How far was the League of Nations a failure? Explain your answer. - Successes of the League of Nations, were all little, but went a long way. If you think about it, the league did not really have much power in its hands due to the lack of powerful countries, etc. So they were only really capable of making minor-scaled adjustments (such as Vilna in 1920) but they had a great impact, since a war could have began from such minor troubles. In 1920, the league of Nations ...read more.