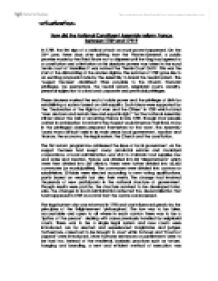 How did the National Constituent Assembly reform France between 1789 and 1791?

How did the National Constituent Assembly reform France between 1789 and 1791? In 1789, the first sign of a radical attack on royal power happened. On the 23rd June, three days after splitting from the 'Estates-General', a public promise made by the Third Estate not to disperse until the King had agreed to a constitution and a limitation on his absolute powers was taken in the royal tennis court at Versailles; it was named the 'Tennis Court Oath'. This was the start of the dismantling of the ancien r(gime. The summer of 1789 gave rise to an exciting proposal made by the Assembly to break the feudal system. The 'August Decrees' abolished: tithes payable to the Church, financial privileges, tax exemptions, the feudal system, seigniorial courts, venality, personal subjection to a lord and corporate and provincial privileges. These decrees marked the end of noble power and the privilege of birth by establishing a society based on civil equality. Such ideas were supported by the 'Declaration of the Rights of Man and the Citizen' in 1789 which stated 'men are born and remain free and equal in right.' Yet the National Assembly still set about the task of reforming France in late 1789. Though most people waited in anticipation for reforms they hoped would improve their lives, many in the privileged classes prepared themselves for the worst. ...read more.

In contrast, reforms such free trade were introduced. This meant trade could happen without the imposition of taxes and duties on the goods- the main good being grain. Also, guilds and internal tariffs were abolished, so a national market was created for the first time. This was further aided by the creation of a single system of weights and measures- the decimal system- which applied to the whole of France. A programme of reforms related to the economy dealt with taxation and finance. Indirect taxes- the 'gabelle', 'octrois', 'traites'- and the state monopoly on growing, distributing and selling tobacco were abolished, as were the old direct taxes- such as the 'taille' and 'vingti�mes'- and tax farming. The new financial system, which came into effect in January 1791, established three new direct taxes. The 'contribution fonci�re' - a land tax from which there were no exemptions or special privileges was the first. The second was the 'contribution mobil�re'- a tax on movable goods such as grain, payable by active citizens and the 'patente' which was a tax on commerical profits. These reforms were in line with the principle of equality as citizens would pay in accordance to their ability to do so. One of the more defining reform programmes of the National Assembly was the Church. ...read more.

After two years of some success, a new system had been created and the Assembly disbanded to allow elections to take place. The reforms promoted bourgeois interests, from the way the bourgeoisie came to dominate local administration to their new found status as a result of the abolition of noble titles. However, the reforms had still not done enough for the rest of the still deprived Third Estate. Also, the reforms had undermined the Roman Catholic Church- something which the Clergy did not like as many lost out. In the end, the Assembly had restored a little of the French population's faith in the government but it had a lasting impact in splitting France. In hindsight, it is easy to say that had the Assembly handled things better, major hostilities yet to come could have been prevented. Although, at the time the French citizens were still fed up and not feeling anymore satisfied with their country or the monarchy- regardless of what measures the Assembly took. It was a sign that the mutual feeling of discontent would end the Monarchy in the troubled and bloody years to succeed the reforms. What must not be forgotten though is, even two hundred years after the French Revolution, the reforms of the National Constituent Assembly laid lasting and fundamental foundations to how France is run today. ?? ?? ?? ?? Pamela Bolla 13sm ...read more.