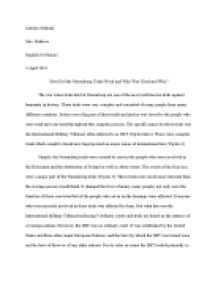 How Did the Nuremberg Trials Work and Who Was Tried and Why?

﻿Jacklyn Oleksak Mrs. Fialkow English 10 Honors 2 April 2011 How Did the Nuremberg Trials Work and Who Was Tried and Why? The war crime trials held at Nuremberg are one of the most well-known trials against humanity in history. These trials were very complex and consisted of many people from many different countries. Justice was a big part of these trials and justice was served to the people who were tried and convicted throughout this complex process. The specific name for these trials was the International Military Tribunal, often referred to as IMT (Taylor Intro). These were complex trials which sought to break new legal ground on major issues of international law (Taylor 4). Simply, the Nuremberg trials were created to convict the people who were involved in the Holocaust and the destruction of Poland as well as other events. The events of the Nazi era were a major part of the Nuremberg trials (Taylor 3). These trials were much more intricate than the average person would think. It changed the lives of many, many people; not only were the families of those convicted but of the people who sat in on the hearings were affected. ...read more.

He was tried at Nuremberg. Unlike Goering, Funk feared for his life and would become defensive and teary-eyed when asked about his political activity. He claimed he was only a small part of the things that happened and had no idea what was going on (Goldensohn 76). Funk did not lead the destructive life-style that Goering did but what he did in his adult years was enough to get him into these trials and be convicted. In 1931 he retired from the editorship of the paper, ?because I felt that the National Socialists were certain to assume power and I was drawn to the movement. Germany was in a crisis. Unemployment was great. Class struggles existed (Goldensohn 77). Funk was never part of the inner circle of Hitler, He was not a politician (he only headed the office for Private business for a few months) (Goldensohn 79). Then average person today in 2011 would think that all the people tried in Nuremberg hated the Jews and were anti-Semitic. Funk was actually a friend with many Jewish people, he worked with Jews; he did not hate them (Goldensohn 80). ...read more.

It was very useful in helping me find out what was important for my paper and what was not as important. It helped my research become more detailed and it made it a better paper all together. I accessed it in the PHS library from searching on advances search Google. Taylor, Ella. ?Crimes against humanity.? The Village Voice. 29 September- 5 October 2011. ProQuest. PHS library. 22 March 2011. http://proquest.umi.com This website did not help me at all. It was not as to the point as the other resources I used. It was vague and unhelpful. It did have some correct information and it was a knowledgeable source but it was not what I needed to write my paper. I accessed it through the PHS databases. Taylor, Telford. The anatomy of the Nuremberg trials. New York: Alfred A Knopf, 1992. Print This was my most valuable source. It gave me much more than I needed and gave me a variety of information to choose from. It was not an easy reading level to read at. It was most likely written for well-educated adults but I was able to decipher the information I needed for my research. The information is accurate, I checked through other sources. This was my most helpful guide throughout the research. I accessed it at the Public library. ...read more.