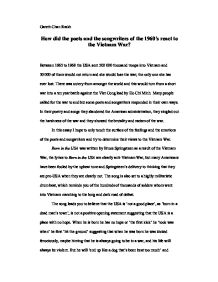 Gareth Chan Rrakh How did the poets and the songwriters of the 1960's react to the Vietnam War? Between 1965 to 1968 the USA sent 500 000 thousand troops into Vietnam and 50 000 of them would not return and she would lose the war; the only one she has ever lost. There was outcry from amongst the world and this would turn from a short war into a ten year battle against the Viet Cong lead by Ho Chi Minh. Many people called for the war to end but some poets and songwriters responded in their own ways. In their poetry and songs they slandered the American administration, they singled out the harshness of the war and they showed the brutality and racism of the war. In this essay I hope to only touch the surface of the feelings and the emotions of the poets and songwriters and try to determine their views to the Vietnam War. Born in the USA was written by Bruce Springsteen as a result of the Vietnam War, the lyrics to Born in the USA are clearly anti-Vietnam War, but many Americans have been fooled by the upbeat tune and Springsteen's delivery to thinking that they are pro-USA when they are clearly not. The song is also set to a highly militaristic drum beat, which reminds you of the hundreds of thousands of solders whom went into Vietnam marching to the long and dark road of defeat. The song leads you to believe that the USA is 'not a good place', as 'born in a dead man's town', is not a positive opening statement suggesting that the USA is a place with no hope. When he is born he has no hope or 'the first kick' he 'took was when' he first 'hit the ground' suggesting that when he was born he was kicked ferociously, maybe hinting that he is always going to be in a war, and his life will always be violent. ...read more.

This was thought to have ended many years ago and now it is back, all thanks to 'helpful' America. Surf, Sea, Sun, Sex, Drugs and Sand. What is this? This is the mentality of the American soldiers to the Vietnam War, it was just like a holiday. The commies are just useless 'things' and they are there to be blown up. The tune that Zapping the Cong is set to I Get Around by the Beach Boys was the code that they lived by. The Americans think that they are the best and everything they do is correct and is for the good of the world, for example blowing up helpless children. But the poet, Adrian Mitchell certainly thinks differently, his perception of the American solders is that they are a mindless warmongers and they think they are the best and when they get something wrong they just say sorry, 'I'm really rocking the delta ... got 'em crawling for shelter ... but I always say sorry'. The Americans went into Vietnam completely fleeced by their own administration, 'and the president told' him 'it wouldn't take long'. This is a very racist piece of poetry as it hints that the we (the Americans) are the biggest and the best and all of Asia is second rate, so they are 'zapping the cong back where they belong' he believes that they are animals and he is scaring them back into their holes. 'Hide you yellow asses' again highlights the racism of the USA in the 1960s. 'Had a bomb in my 'copter' he is almost treating the war as an extension to video games, in the 1960's 'space invaders' had just come out and they saw Vietnam as an extension of the game. American terms for video games such a 'burning like toast,' and 'then I got to be zooming' ''cause' he is 'zapping the cong' this again proves that the solders were treating the war as a game. ...read more.

'Made a marble phonebook and I carved all the names' this is almost turning the fact that American soldiers died into a black joke. As in phonebooks you get the address and telephone number, but in this case you get their date of death and time and cause. But in reality it is just a long black marble memorial with 50 000 names carved on. 'They're only dropping peppermints and daisy chains' no they are not dropping Napalm bombs but daisy chains and its like the hippy movement and 'peace man.' We are only showing them peace and love, but in a different form. 'You put your bombers in, you put your conscience out,' and 'you take a human body and you twist it all about' this is set to the tune of the hockey cokey this is usually a cheery dance, for weddings and parties. So the American fighter pilots are almost treating the war like a joke. After hearing all of the truth he no longer wants to be mobile, he might as well be dead, if this really is the truth. 'So scrub my skin with women' this refers to touch. 'Chain my tongue with whisky' this refers to taste. 'Stuff my nose with garlic' this refers to smell and the pain that stuffing a whole head of garlic not just a clove up your nose will cause. But he will not feel this as he has 'scrubbed' his 'skin with women' and no longer can feel. 'Coat my eyes with butter' this refers to sight. 'Fill my ears with silver' refers to hearing. 'Stick my legs in plaster' he finally will be immobile and then finally 'tell me lies about Vietnam.' Then he cannot and will not do anything about and it, even if he feels guilty. Therefore it is clear that much of not all, if the poetry and songs about the Vietnam War were very negative. This is because the whole of the world was against the Vietnam War and this how they chose to put their message across to people. ...read more.