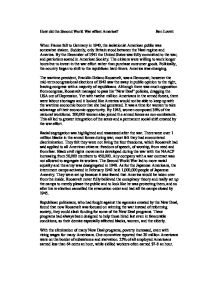 How Did the Second World War Affect America?

How did the Second World War affect America? Ben Lovett When France fell to Germany in 1940, the isolationist American public was somewhat shaken. Suddenly, only Britain stood between the Nazi regime and America. By the December of 1941 the United States was fully committed to the war, and patriotism soared in American Society. The citizens were willing to work longer hours but to invest in the war effort rather than purchase consumer goods. Politically, the country began to shift to the republican hard-liners. America was changing. The wartime president, Franklin Delano Roosevelt, was a Democrat; however the mid-term congressional elections of 1942 saw the sway in public opinion to the right, leaving congress with a majority of republicans. Although there was much opposition from congress, Roosevelt managed to pass his "New Deal" policies, dragging the USA out of Depression. Yet with twelve million Americans in the armed forces, there were labour shortages and it looked like America would not be able to keep up with the wartime economic boom that she had generated. ...read more.

Roosevelt never fully believed the conspiracy theory and really set up the camps to merely please the public and to look like he was protecting them, and so after his re-election cancelled the evacuation order and had all the camps closed by 1945. Republican politicians, who had fought against the agencies created by the New Deal, found that now Roosevelt was focused on winning the war instead of reforming society, they could slash funding for some of the New Deal programs. These programs had always been designed to help those hired last even in favourable conditions, so their demise especially affected blacks, women, and the elderly. With the elimination of many New Deal programs, poverty increased, even with rising wages for many Americans. One committee reported that 20 million Americans were on the border of subsistence and starvation. 25% of all employed Americans earned less than 64 cents an hour, while skilled workers often earned $7-8 an hour. From 1940-1945, the number of civilian employees working for the government rose from 1 million to nearly 4 million. ...read more.

President Roosevelt died on April 12, 1945, less than a month before the German Surrender. In 1945, America was profoundly different from what it had been four years prior. Because of World War Two, America had changed in three significant ways: Firstly the crumbling economy had recovered. Similar to the situation after World War One, America emerged from the Second World War with a strong economy and relatively few casualties. Secondly, during his presidency, Roosevelt had managed to create a nationwide fear of Communism that had escalated by 1950 to McCarthyism and the severe segregation of Communists to "True Americans". Thirdly America was the most powerful nation in the world, if for no other reason than it alone possessed the atom bomb. With a new leader, the conservative President Truman America was due for more reforms in the future including the "Fair Deal", not too unlike the "New Deal". So America, literally untouched by war itself, found it had significantly changed Socially, Politically, and Economically and the America of 1940 was vastly different to the America of 1945. ...read more.