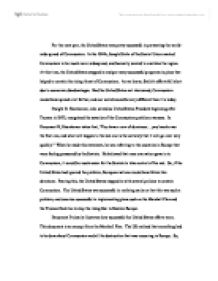 How did the US prevent Communism in the US

For the most part, the United States was pretty successful in preventing the world-wide spread of Communism. In the 1940s, Joseph Stalin of the Soviet Union wanted Communism to be much more widespread, and basically wanted to overtake the region. At this time, the United States stepped in and put many successful programs in place that helped to contain the rising threat of Communism. As we know, Stalin's efforts fell short due to economic disadvantages. Had the United States not intervened, Communism would have spread a lot farther, and our world would be very different than it is today. Dwight D. Eisenhower, who served as United States President beginning after Truman in 1953, recognized the severity of the Communism problem overseas. In Document H, Eisenhower states that, "You have a row of dominoes... you knock over the first one, and what will happen to the last one is the certainty that it will go over very quickly." ...read more.

So, the US government gave money to European nations to help rebuild Europe. Without this money, the Soviets could have easily taken over these nations, which would assist their hope of world dominance. The US thought that if the countries were attempting to stand up to Communism, they deserved some type of financial assistance. The money not only stopped Communism, but it also allowed European countries to use the money to rebuild cities, and increase the standard of living. After WWII, Capitalist strongholds, namely France and Britain, were suffering from lack of food and shelter. This is when the United States stepped in and provided aid. If the United States had not interfered when they did, most of Europe would probably be Communist, and controlled by the Soviet Union. This is not because Europe wanted to be Communist, but simply because they themselves didn't have the money or the power to stop the Soviets. ...read more.

Also under Truman, the US was able to assist people in Berlin through the Berlin airlift. This was a huge success, and perhaps one of the main reasons that the United States were able to slow and then stop the growth of Communism. In conclusion, during the Truman and Eisenhower administrations, the policy of containment was used to try and save the free world from the threat of Communism. Both presidents faced criticism at the time, because they put peace on the line to prove the superiority of socialist ideals. In the end, the decades of hard work paid off, and the Capitalists had officially defeated the threat of Communism. Although the United States successfully stopped Communism, they were not perfect. When Truman helped Greece and Turkey under his doctrine, there were numerous other countries in which Communists were convincing starving, underfed people that Communism was the right thing. In the end, however, the US was very successful in preventing the world-wide spread of Communism. \ ...read more.