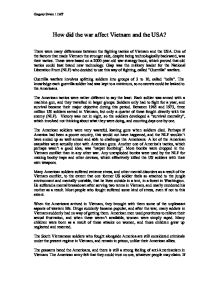 How Did the War Affect Vietnam and the USA?

How did the war affect Vietnam and the USA? There were many differences between the fighting tactics of Vietnam and the USA. One of the factors that made Vietnam the stronger side, despite being technologically backward, was their tactics. These were based on a 2000-year-old war strategy book, which proved that old tactics could beat brand new technology. Giap was the military leader for the National Liberation Front (NLF) who decided to use this way of fighting, called "Guerrilla" warfare. Guerrilla warfare involves splitting soldiers into groups of 3 to 10, called "cells". The knowledge each guerrilla soldier had was kept to a minimum, so no secrets could be leaked to the Americans. The American tactics were rather different to say the least. Each soldier was armed with a machine gun, and they travelled in larger groups. Soldiers only had to fight for a year, and survival became their major objective during this period. Between 1965 and 1973, three million US soldiers served in Vietnam, but only a quarter of these fought directly with the enemy (NLF). Victory was not in sight, so the soldiers developed a "survival mentality", which involved not thinking about what they were doing, and counting days one by one. The American soldiers were very wasteful, leaving guns when soldiers died. ...read more.

Girls, mainly prostitutes, were still dying of VD after catching it from US soldiers. Others had grown desperate since the heroin ran out, and now have to find �4-5 per day for opium. If addicts had no arms or legs to inject into, they used veins in the side of their head. 6.2 million tonnes of bombs were dropped between 1964 and 1971, whole villages being destroyed by bombs, and their inhabitants killed with napalm. Agent Orange was another chemical used in Vietnam. It was a defoliant for destroying forests so the enemy could be seen. It also had severe effects on the people of Vietnam because land was infertile for years, so food still cannot be grown in certain areas of the country, and perhaps the most disturbing fact, children were born with deformed limbs. Many people after the war were made homeless, after their villages had been cleared as part of the "Strategic Hamlet Programme" (an attempt by the Americans to keep civilians under control), and placed in relocation centres. Even the Americans themselves were shocked at the effects of the war in Vietnam which could still be seen in 1982. A group of former US soldiers, one of which was paraplegic since the war, went to Vietnam, and saw the destruction that the 11 million gallons of Agent Orange dumped on Vietnam had done. ...read more.

The Vietnamese soldiers were better fighters prepared for a long war. The Americans thought they'd win easily, and the war would be short. There is less mental suffering for the Vietnamese people now, because everything went as they wanted, and the enemy was beaten. A lot of Americans still shocked that their country, one of the richest in the world, didn't win against communism. There is no physical suffering in America. The country hasn't been damaged. The only casualties, apart from John Filo, were soldiers. To conclude these paragraphs, Americans and Vietnamese are both still suffering from the war. The Vietnamese will have intense suffering for a very long time, whereas the Americans will only have emotional scars. After the war had finished, politically, Vietnam saw some major changes. Ho Chi Minh united North and South Vietnam, under a Communist regime; a fate which the Americans had not succeeded in preventing. The American president, L. B. Johnson lost a lot of popularity, and so to did the American military. Despite being told that they had won the war, the American public were very anti-war, especially in the 1970s, when the messages of love and peace delivered by new age people, or hippies, were most popular. Back in Vietnam, the American - selected leader of South Vietnam was jailed, as were soldiers who fought against the Vietcong. ?? ?? ?? ?? Gregory Swain 11MT ...read more.