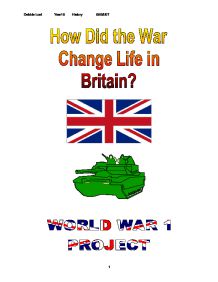 How did the War change life in Britain?

Contents Title Page No. Introduction 3 How did it all start? 4 Who fought for the British in the War on the Western Front? 5 Recruitment 6 Recruitment poster 7 More on recruitment 8 DORA 10 Rationing 11 Censorship and propaganda 13 Role of Women 15 Conclusion 16 Bibliography 17 Introduction World War I was one of the most destructive wars and involved more countries than any other war before or after up until World War II. Many people were against war at first but once Germany invaded Belgium on 3rd August anti-war feelings evaporated almost overnight being replaced with fierce patriotism. Women in Britain cheered on husbands and sons as they went off to fight and there were long queues outside army recruitment offices. Little did they know that this war would goon for four long years! This project is about how the war changed life in Britain. Included in this will be information on the following: Recruitment - voluntary and conscription, Pals, Conscientious objectors DORA - Defence of the Realm Act Rationing Censorship and Propaganda Role of Women How did it all start? There were no major conflicts in Europe in the hundred years before 1914. All of the countries kept peace between themselves by a system of balanced alliances. This Balance Power, as it was called, depended upon opposing alliances being roughly equal strength. The system had one great danger. If the balance were to be upset the two sides went to war with each other, and all the major countries of Europe would be plunged into conflict. That is what happened in 1914, and World War I began. It took just six weeks to shatter the peace, which had lasted for a century. The first incident was the murder in Sarajevo on 28th June of Archduke Franz Ferdinand, heir to the Austrian throne. Sarajevo was capital of the Austrian province of Bosnia. ...read more.

For example: * It introduced British Summer Time (putting the clocks forward an hour) to give more daylight for work in the evening * It cut down on the pub opening hours * It gave instructions for beer to be watered down * Customers in pubs were not allowed to buy rounds of drinks. Rationing One of the aims of DORA was to prevent food shortages. At first, the British people themselves caused food shortage problems. As soon as war broke out they panicked and brought large amounts of food, which they hoarded at home. Shops sold out completely within few days. However, everybody gradually calmed down and shortages did not really become serious until the end of 1916. Until that time much of Britain's food was still important. But by 1917 the Germans were using their submarines to stop supply ships from getting through. In April 1917 Britain had only six weeks' worth of wheat stores! Food prices rose sharply and queues for food grew. It was a bleak year for most people. Coal was so short that in October it was rationed accordingly to the number of rooms in the house. In 1917 it was clear that DORA measures were not enough to reduce the amount of food being eaten or increase the amount being produced. The government tried to operate a voluntary ration scheme. It asked people to limit themselves to four pounds of bread (1.80 kilograms), two and a half pounds of meat (1.13 kilograms), and three quarters of a pound of sugar (340 grams) each week. The King and Queen limited themselves to this ration and if you follow their example you were issued with a blue ribbon! But the campaign failed- shortages of bread and potatoes continued. Many working people could not afford to buy meat and sugar anyway- their diet had consisted of mainly bread even before the rationing was introduced! ...read more.

However, in 1915 the government and the unions came to an agreement. Women workers were to be paid the same as men, but women would only be allowed to take over men's "for the duration of the War or till sufficient male labour should again be available". Later in 1915 the army was so short of munitions that the government set up it own munitions factories, where there were no male employers or workers to sop women being employed. A turning point came when conscription (a law that forced all men between eighteen and forty-one to join the armed forces if they were needed), was introduced in 1916. At this point, many factory workers who had joined the army. Before the War it had been assumed that women could only do light, indoor work which did not need much strength or skill. This was why so many women worked as domestic servants. These views were soon shown as domestic servants. These views were soon shown to be wrong. During the War women learned new skills within a much shorter time than he normal training period. In many jobs women performed better than the men they were replacing, Even though the conditions they worked were often tougher than they had been for men before the War. Conclusion On 11th November 1918 the war ended with the armistice being signed and Germany surrendering. Almost nine million died of whom nearly a million were from Britain and it's Empire. When the British people heard the war was over they danced round Trafalgar Square and crowded outside Buckingham Palace singing and cheering. The soldiers went home to a heroes' welcome. Over two million men, some healthy, some disabled and some wounded returned from the trenches. Their lives, and lives of their families would never be the same again. Limited unemployment benefit and no National Health Service didn't help the soldiers cause and life was very, very hard. The new government was forced to help and passed various reforms which meant that life for these men began to get better albeit slowly. ...read more.