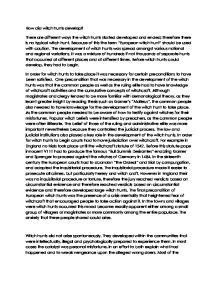 How did the witch hunts develop?

How did witch hunts develop? There are different ways the witch hunts started developed and ended; therefore there is no typical witch hunt. Because of this the term "European witch hunt" should be used with caution. The development of witch hunts was spread amongst various national and regional variations. It was a mixture of hundreds if not thousands of separate hunts that occurred at different places and at different times. Before witch hunts could develop, they had to begin. In order for witch hunts to take place it was necessary for certain preconditions to have been satisfied. One precondition that was necessary in the development of the witch hunts was that the common people as well as the ruling elite had to have knowledge of witchcraft activities and the cumulative concepts of witchcraft. ...read more.

For example in England no trials took place until the witchcraft statute of 1542. Before this statute pope innocent V111 had to produce the famous "Bull Summis Desirantes" enabling Kramer and Sprenger to proceed against the witches of Germany in 1484. In the sixteenth century the European courts had to abandon "the Ordeal" and trial by compurgation, and adopted the inquisitorial procedure. The inquisitorial procedure made it easier to prosecute all crimes, but particularly heresy and witch craft. However in England their was no inquisitorial procedure or torture, therefore the jury reached verdicts based on circumstantial evidence and therefore reached verdicts based on circumstantial evidence and therefore developed large witch hunts. The final precondition of European witch hunts was the presence of a crisis mentality that heightened fear of witchcraft that encouraged people to take action against it. ...read more.

Surprisingly the plague did not very often serve as the catalyst for specific witch hunts. The plague did aggravate social tensions, and it probably did contribute to a mood that encouraged the development of witch hunts, but it is probable that the gross amount of plague cases was too large too blame on witch crafts. The process of scapegoating in response to misfortune was probably the most common trigger of European witch hunts, but it was by no means the only one. Sometimes individuals deliberately and maliciously brought charges of witch craft against their antagonists, political rivals, economic competitors and sometimes even family members. Another trigger for the development of witch hunts was the belief that large groups; often nuns or children were possessed by the devil. The possession resulted in fits, skin lesions, extra ordinary strength, speaking in tongues and abnormal deep voice. The triggers of witch hunts may have been ...read more.