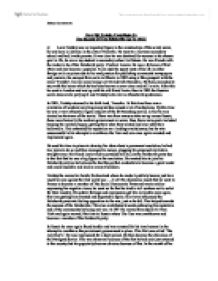 How Did Trotsky Contribute To

How Did Trotsky Contribute To The Success Of The Bolsheviks Up To 1922? a) Leon Trotsky was an important figure in the construction of the soviet union, he was born in Ukraine in the city of Yanovka. He went to a German secondary school and had Jewish parents. It was clear he was destined for success in his chosen goal in life, he was a top student in secondary school in Odessa. He was friends with the leader to be of the Bolshevik party, Vladimir Lennin. He was a follower of Karl Marx and also became a populist. As an adult he spent most of his life in either foreign exile or prison due to his mad passion for publishing communist newspapers and journals. He escaped from exile in Siberia in 1902 using a fake passport with the name 'Trotsky', his real name being Lev Davidovich Bronstein. He then proceeded to stay with this name which he has been known as ever since and still is now. After this he went to London and met up with his old friend Lenin, then in 1903 the Russian social democratic party split and Trotsky took over as Menshevik spokesman. In 1905, Trotsky returned to his birth land, Yanovka. At this time there was a revolution of workers involving many strikes around a lot of workplaces. By this time he was a very influential figure and part of the St Petersburg soviet, in fact he was elected as chairman of the soviet. There was then many soviets set up across Russia, these were basically the workers government or union, thus, there main goals included keeping the workers happy, getting them what they wanted and also what they believed in. This enhanced his reputation as a leading revolutionary, but he was unsuccessful in his attempts to overthrow the Tsar and was once again arrested and imprisoned again. ...read more.

They all teamed up together when it became obvious that Lenin was about to die to ensure Trotsky did not come to power. The Politburo was not a united group. They split into two groups: The Left Opposition and The Rightists. In the main, the group split up as a result of economic disagreements about the USSR. They both rivalled each other in that the rightists believed that they should continue the New Economic Policy, which was introduced by Lenin, for the next 20 years. However, the party including Trotsky, Kamenev and Zinoviev disagreed with them and the New Economic Policy. They thought that the country should be an agricultural one for no longer but an industrial one because they thought if they didn't, western, communist-hating, countries would invade and evaporate the communist culture of Russian life. Trotsky's arrogance once again lost him popularity in his colleagues. Zinoviev and Kamenev disliked him as a person, although they did agree with his policies. This was mainly a result of his conduct and rude manner. He behaved this way in a Politburo meeting and that lost him friends amongst the group and left him as an outcast in the group with no personal friends. Before Lenin died he wrote a letter to the Party Congress, this included that the main problem that the Politburo could face would be the split of the group. He said that the main people who would cause this split were Trotsky and Stalin. This was known as 'The Testament' It also stated that Stalin was 'Too Rude' and suggested he should be removed and replaced from the party. He said Trotsky had 'Outstanding Ability', clearly showing that Lenin would rather have Trotsky as his successor. When this testament was heard, it looked as though Stalin was to be eliminated from the group but he was saved by Zinoviev who stood up for him saying Lenin's comments about him were 'Groundless and Unfair' He also noted how well Stalin had worked with himself and Kamenev since Lenin's death. ...read more.

or heard about them ensuring Stalin's rule further more as it emphasised his callas power shield and scared people into keeping him in power. It also made sure every person in the stand was publicly humiliated and couldn't pose a threat to Stalin in the future as they would be commonly unpopular. The 'NKVD' was set up by Stalin in order to enforce his rules and orders. The were also referred to as 'The Secret Police' Stalin usually made sure what they did stayed out of the public eye as he often instructed them to carry out assassinations, one of the most famous being Leon Trotsky with an ice axe. The NKVD helped him eliminate his closest threats and enemies therefore was a sure-fire way of keeping control of The USSR. 'Propaganda and the Cult OF Personality' is the last factor that was equally important to Stalin's success, the propaganda was always in Stalin's favour, promoting his image. He also ensured all the newspapers were on his side creating a positive light for him, this was because newspapers were the only source for the public to hear about him and his exploits. Maintaining his successful and long rule over the USSR. It is in fairness, true to an extent that all 4 reasons stated at the beginning of Question C were important to his successes: 'The Purges and show trials' ensured public humiliation for party members who were ill behaved or who cheated Stalin. 'The Secret Police' or The 'NKVD' Helped him eliminate his enemies and also scare opponents off. 'The propaganda and Cult Of Personality' made sure he maintained his good public image and popularity but I believe his Economic Policies contributed the most towards him keeping power for so long, they helped him revolutionise the Soviet unions Economy and power, catching up with other foreign countries who were beginning to become a threat to the USSR helping him also and mainly keep control of the USSR. ?? ?? ?? ?? History Coursework ...read more.