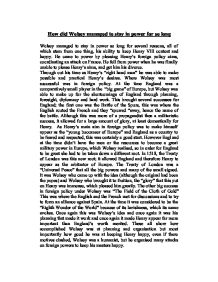 How did Wolsey managed to stay in power for so long?

How did Wolsey managed to stay in power for so long Wolsey managed to stay in power so long for several reasons, all of which stem from one thing, his ability to keep Henry VIII content and happy. He came to power by pleasing Henry's foreign policy aims, coordinating an attack on France. He fell from power when he was finally unable to please Henry's aims, and get him his divorce. Through out his time as Henry's "right hand man" he was able to make possible and practical Henry's desires. Where Wolsey was most successful was in foreign policy. At the time England was a comparatively small player in the "big game" of Europe, but Wolsey was able to make up for the shortcomings of England through planning, foresight, diplomacy and hard work. ...read more.

However England at the time didn't have the men or the resources to become a great military power in Europe, which Wolsey realised, so in order for England to be great she had to be taken down a different root. In 1518, the Treaty of London was this new root; it allowed England and therefore Henry to appear as the arbitrator of Europe. The Treaty of London was a "Universal Peace" that all the big powers and many of the small signed. It was Wolsey who came up with the idea (although the original had been the popes) and Wolsey who brought it to fruition, the "glory" that this put on Henry was immense, which pleased him greatly. ...read more.

These all show how accomplished Wolsey was at planning and organisation but most importantly how good he was at keeping Henry happy, even if there motives clashed, Wolsey was a humanist, but he organised many attacks on foreign powers to keep his masters happy. Another important role of Wolsey's was law and order, as Lord Chancellor he was the highest legal person in the country. One of Henry's major domestic concerns was keeping the Nobles in check, as his father had usurped the throne the Tudor dynasty was relatively new, and the state had no standing army where as the noble all had there own, this all meant that the nobles were potentially dangerous to Henry. Wolsey was able to use his legal power to curtail the Nobility, he did this through several methods, his first was the idea of "impartial justice" implemented under Wolsey ...read more.

The author shows some understanding of Wolsey's role in foreign negotiations and in ensuring loyalty to the King but the examination is very brief and other points could have been considered, particularly the argument that Henry disliked the day-to-day work associated with being King so looked to Wolsey to relieve the burden.