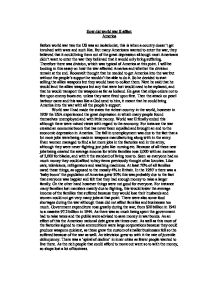 How did world war II affect America Before world war two the US was an isolationist, this is when a country doesn't get involved with wars and such like. But many Americans wanted to enter the war, they believed that it could bring them out of the great depression although most Americans didn't want to enter the war they believed that it would only bring suffering. Therefore there was division, which was typical of America at this point. I will be looking in this essay on how the war affected America and whether the division remain at the end. Roosevelt thought that he needed to get America into the war but without the people's support he wouldn't be able to do it. So he decided to start selling the allies weapons but they would have to collect them. Next he said that he would lend the allies weapons but any that were lost would need to be replaced, and that he would transport the weapons as far as Iceland. He gave that ships orders not to fire upon enemy boats etc. unless they were fired upon first. Then the attack on pearl harbour came and this was like a God send to him, it meant that he could bring America into the war with all the people's support. World war I had made the states the richest country in the world, however in 1929 the USA experienced the great depression in which many people found themselves unemployed and with little money. ...read more.

For instance the Japanese-Americans were very harshly treated, although before the war some Japanese-Americans were discriminated against, after the attack on pearl harbour within a day the behaviour towards all 'aliens' but mostly Japanese changed for the worse. The reason it was mostly the Japanese that were affected was because they had no one to stand up for them, they were a minority. Over 100,000 Japanese were interned most of them from the west coast. They were told to take what they could carry anything else would be sold or thrown away. The Japanese were treated like prisoners in the relocation camps most of them were born in the US (Nisei). 17,000 Japanese fought for America, they formed the 442nd, which was one of the most decorated combat squads in the war. But still the Japanese-Americans were seen as a threat and many anti-Japanese slogans were used like 'slap the Japs'. Discrimination also existed towards black Americans. For instance, before the war there were the 'Jim crow laws' in the southern states, which discriminated against black people. Black people weren't allowed to vote and had to have special toilets only for black people, special areas in cafes that were only for black people and any black person had to give up their seat on a bus etc. to a white person. There was also a lot of lynching on black people, which was to illegally hang someone. ...read more.

During the war the number of women workers increased from 12 million to 18.5 million. There were 300,000 working in the armed forces. Most women had higher pay than before and in some states they even had equal pay to men. This improved women's confidence that they could do good work. There was also progress in terms of women's attitude towards work. Many women didn't want to go back to domestic jobs. 32%of married women still had jobs after the war. 60% of the US was in favour of married women continuing to work after the war. Women were beginning to be perceived differently for example Rosie the Riveter (a very masculine women). Despite this once the war had ended many women went back to traditional roles. 50% of women preferred working in the home. And in 1950 only 2% more women were working than before. Therefore in conclusion I think that the war brought about major changes in an economic view. I think that it definitely brought them out of the depression and people generally became happier. And certainly in the war the attitudes to Japanese-Americans changed although this was only short term and does not affect them today. I also think that it took a great step towards equality for blacks but it did not bring it around straight away. As for women during the war a lot changed but afterwards most women went back, but they still had the confidence to work and that's why they're where they are today. Jack Guthrie ...read more.