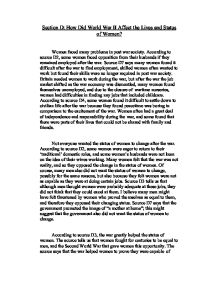 How Did World War II Affect the Lives and Status of Women?

Section D: How Did World War II Affect the Lives and Status of Women? Women faced many problems in post war society. According to source D2, some women faced opposition from their husbands if they remained employed after the war. Source D7 says many women found it difficult after the war to find employment, skilled women often wanted to work but found their skills were no longer required in post war society. Britain needed women to work during the war, but after the war the job market shifted as the war economy was dismantled, many women found themselves unemployed, and due to the closure of wartime nurseries, women had difficulties in finding any jobs that included childcare. According to source D4, some women found it difficult to settle down to civilian life after the war because they found peacetime was boring in comparison to the excitement of the war. Women often had a great deal of independence and responsibility during the war, and some found that there were parts of their lives that could not be shared with family and friends. Not everyone wanted the status of women to change after the war. According to source D2, some women were eager to return to their 'traditional' domestic roles, and some women's husbands were not keen on the idea of their wives working. Many women felt that the war was not reality, and so they opposed the change in the status of women. ...read more.

Although the extracts in this source are useful in showing a change in attitude towards women during the war, they do not tell us about people's attitudes post war. Source D1 comments on the fact that the war was a turning point for women, and sources D6, D7 and D8 agree with this point. Certain extracts from source D6 tell us about the decision of the Education Committee during the war to allow married women to teach. This decision would probably never have been made if it were not for the war as there was a lack of male teachers probably fighting away, and young single women popularly joined the forces. Source D7 says that the war was a turning point for women because the period began to raise women's expectations of themselves and their capabilities. Source D8 tells us about the change in attitude towards women's leisure time. According to this source a large amount of people interviewed (over half) thought the idea of women drinking in public houses was acceptable. However, source D8 does not comment on who the "people interviewed" were, and so this source's statistics could be biased. In spite of this, I believe sources D8 and D7 to be quite reliable, due to the fact that they are both 'mass-observations', which not only make their statistics official but reliable because a "mass" suggests that a large amount of people participated. ...read more.

This woman had an extremely stressful job, so it is not surprising that she comments on the difficulties of returning to civilian life after the war. This source is reliable in giving us insight on the way some women felt about peacetime. Source D6 contains extracts of primary evidence, and tells us about certain decisions made by the government during the war to ensure women could contribute as a workforce. However, this source does not tell us how attitudes changed after the war. The government wanted to change the status of women during the war because they needed women to work. According to source D7 the government changed its' stance completely on the idea of women working after the war because they no longer needed them. This proves that the decisions made by the government during the war were made to influence women into working, and could be viewed as a type of propaganda. In spite of this, these decisions changed many of people's attitudes forever. Source D7 makes the point that the war did not so much change the roles and status of women, but it changed the way women thought of themselves and made them more confident. Source D8 tells us that a majority of people thought it acceptable for women to drink in public houses, which shows that the war changed many of people's attitudes, as women did not drink in pubs before the war. Both of these sources show that the war affected the lives of women significantly, and their status was improved in a positive way. ...read more.