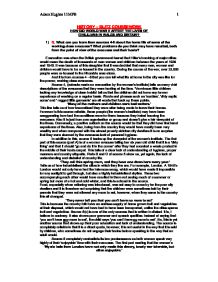 How did World War II affect the lives of civilians in Wales and Britain?

HISTORY - BLITZ COURSEWORK HOW DID WORLD WAR II AFFECT THE LIVES OF CIVILILIANS IN WALES AND BRITAIN? 1) Q. What can you learn from sources 4-6 about the home life of some of the working class evacuees? What problems do you think may have resulted, both from the point of view of the evacuees and their hosts? Evacuation was when the British government feared that Hitler's bombing of major cities would mean the death of thousands of men women and children between the years of 1939 and 1945. It was because of this slaughter that it was decided that many men, women and children would have to be re-housed in the country. During the course of the war, over 33,000 people were re-housed in the Rhondda area alone. And it is from sources 4 -6 that you can tell what life at home in the city was like for the poorer, working class evacuees. Source 4, (extracts made on evacuation by the women's institute) tells us many vivid descriptions of the evacuees that they were hosting at the time. 'Verminous little children lacking any knowledge of clean habits' tell us that the children did not have any former experience of washing on a regular basis. Words and phrases such as 'scabies', 'dirty septic sores' and ' ragged little garments' are all words that back up these points. 'Many of the mothers and children were bed wetters.' This line tells us of how traumatised they were after being made to leave their homes. However is this source reliable, these people (the women's institute) may have been exaggerating how bad the conditions were for them because they hated housing the evacuees. Also it is just from one organisation or group and doesn't give a fair viewpoint of the times. Conversely, a positive outlook on the source would be that they did have first hand experience of the times. ...read more.

would be going off to fight, it was decided to 'move' thousands of women and children out of the cities being bombed, and, according to the text book 'Family at war' into 'safe' Wales. However, this source is a contradiction in itself, because if Wales was so safe, how come thousands of people had to be evacuated from Cardiff and Swansea to the mining Valleys? As I look at more sources from the booklet, I can see that they are telling us of a distinct danger in Wales. Source 9, taken from the same textbook as source 2, has the line; 'Night after night, wave after wave of German bombers raided England and WALES' This tells us of the fact that Wales indeed, was not safe. Another line from this source is that 'Wales was a safer place to live than the industrial cities of England' but then again, where wasn't, and although it may have been 'safer' it still can't be described as 'safe', as it then goes on, to read that there were 'many raids on Welsh towns'. However, this is a secondary source that has been printed in a text book for low ability pupils, so, not only may it have lost an element of truth as it has been passed on through various different ages, it may also have been 'dumbed down' to make it easier to understand for the pupils of lesser ability. Pembroke Dock, here in West Wales, was very important to Britain during the war. This was due to the vast quantities of oil and fuel reserves stored there, which the planes and other vehicles needed in order to function. And, unsurprisingly, Germany knew this, and source 10 tells us of the bombing raid on Pembroke Dock by the Germans, which resulted in the loss of '33,000,000 gallons of oil' and that it was one of the most 'vicious fires of the second world war'. ...read more.

Many other things changed for civilians as well as these, including the appointment of a new Prime Minister, Winston Churchill, as described in his profile below: WINSTON CHURCHILL Winston Churchill was an inspirational leader who enthused the British public into believing that they could win the war. He did this through his many speeches that created a high morale throughout the country. On May 13th as Prime Minister of a Britain at war, he spoke the words that every British person would remember... "What have I to offer, I can offer you nothing except blood, toil, tears and sweat.... you ask. What is our policy? I will say....It is to wage war, by sea, land and air, with all our might....to wage war against a monstrous tyranny, never surpassed in the dark, lamentable catalogue of human crime. That is our policy. You ask...What is our aim? I can answer that in just one word.....Victory". During the Second World War Churchill's constant radio talks and messages to his people not only encouraged thousands, but gave inspiration and hope to every man, woman and serviceman. His leadership was second to none and this can only be acclaimed to his experience during the First World War where he gave up his political position to take up service with the Army in France. A dockworker in London's East End summed up every Britain's feelings towards Churchill, when asked about Britain's chances in the war he said, ".....we know Britain will claim victory, why?....because 'Winnie' told us so." During his life, Churchill made many different remarks and quotes, all of which were inspirational to Britain's victory and spirit. However, despite some disagreement from some corners, on large, the spirit of Britain can be summed up by the words; - "We shall fight on the beaches. We shall fight on the landing grounds. We shall fight in the fields, and in the streets, we shall fight in the hills. We shall never surrender!" Adam Hughes 11MPB 1 ...read more.