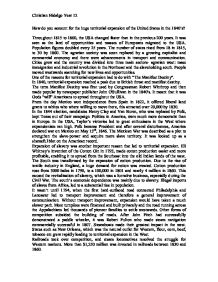 How do you account for the huge territorial expansion of the United States in the 1840's? Throughout 1815 to 1860, the USA changed faster than in the previous 200 years. It was seen as the land of opportunities and masses of Europeans migrated to the USA. Population figures doubled every 25 years. The number of states rised from 18 in 1815, to 30 by 1860. The agrarian society was soon replaced by a growing capitalist and commercial economy and there were advancements in transport and communication. Cities grew and the country was divided into three main sectors- agrarian west: mass immigration and industrial revolution in the Northeast and the slaveholding south. People moved westwards searching for new lives and opportunities. One of the reasons for territorial expansion had to do with "The Manifest Destiny". In 1840, territorial expansion reached a peak due to British threat and manifest destiny. The term Manifest Destiny was first used by Congressman Robert Winthrop and then made popular by newspaper publisher John O'Sullivan in the 1840's. It meant that it was Gods "will" Americans to spread throughout the USA. From the day Mexico won independence from Spain in 1822, it offered liberal land grants to whites who where willing to move there, this attracted over 20,000 by 1830. ...read more.

Steamboats made their greatest impact in the west. States such as New Orleans, which was the natural outlet for Western, flour, corn, beef, tobacco etc grew rapidly leading to territorial expansion in the West. Railroads took over competition, and steam locomotives resolved the struggle for Western markets. More than $1,250 million was invested in railroads between 1830 and 1860. The rivalry between East and West led to an advertisement war. To most Americans "the West" still referred to the area between the Appalachian Mountains and the Mississippi River. Knowing that the average migrant wanted stability and security, newspaper reports and pamphlets aimed at describing the West to easterners usually stressed the bountiful resources of the region. This showed the desire of the federal government to encourage settlement and development in the west. The West had particular values, which attracted immigrants and Europeans to migrate to its lands. It was more innovative, self-reliant and aggressively democratic than the East. This led Western towns to grow fast. In the 1840's, the total urban population grew from 1,843,500 to 3,548,000, an increase of 92%. Changes in the public land policy, such as "The Land Act of 1796", also helped Western settlement. ...read more.

True believes in Mormonism created prosperous communities wherever they settled leading to resentment. They migrated to Missouri but after several massacre moved to Illinois. Their Smith was arrested and murdered in June 1944. Brigham Young became his successor and led to the basin of Great Salt Lake in the Mexican territory, apparently inhospitable for any other white to live. Centralized planning and collective irrigation from mountain streams enabled Mormons to survive. Abraham Lincoln believed that the Mormons should "I propose to let them alone". Along with the migration of the Mormons, the Gold Rush led to the most remarkable westward migration. In 1848 gold had been discovered in the Sacramento Valley. Within a year, 80,000 49ers arrived in California, a population big enough to be justified as statehood. In 1850, they applied to become a state. In conclusion I would say that the huge territorial expansion in the USA was due to the fact, that Europeans saw it as the land of opportunity. Religious movements, economic development and incidents like the Gold Rush led greatly to expansion. People looked for a better life and the idea of becoming prosperous in a short period of time attracted large amounts of people to become part of the Gold Rush. It was the hope that their lives would improve that caused the mass amount of immigration. . Christian Hidalgo Year 12 ...read more.