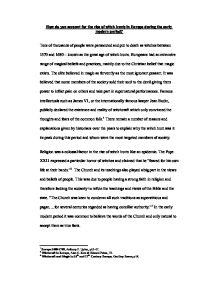 How do you account for the rise of witch hunts in Europe during the early modern period?

How do you account for the rise of witch hunts in Europe during the early modern period? Tens of thousands of people were persecuted and put to death as witches between 1570 and 1680 - known as the great age of witch-hunts. Europeans had an extensive range of magical beliefs and practices, mainly due to the Christian belief that magic exists. The elite believed in magic as fervently as the most ignorant peasant. It was believed that some members of the society sold their soul to the devil giving them power to inflict pain on others and take part in supernatural performances. Famous intellectuals such as James V1, or the internationally famous lawyer Jean Bodin, publicly declared the existence and reality of witchcraft which only convinced the thoughts and fears of the common folk.1 There remain a number of reasons and explanations given by historians over the years to explain why the witch hunt was it its peak during this period and whom were the most targeted members of society. Religion was a colossal factor in the rise of witch hunts like an epidemic. ...read more.

Some historians argue that the staging of witch trials and persecution was a large instrument of social control. A method used by the powerful to be in command of the weak and poor. Most witch-hunting occurred in countries where the population was divided into many different faiths, each Church wanted dominance above the other and suppression of sorcery was one form of keeping people under the fold of religion through imperceptible control and fear. People were led to believe that harvest failure leading to famine, epidemic disease, fire and flood were all aspects that witches could control, although these were supernatural powers individuals fell into the trap of 'blaming' others for their misfortunes. Witches became such scapegoats in early modern Europe, especially those individuals that had foes within the society and were easily victimised. It was far more common for women to be accused of witch craft than men, King James thought this was because the female sex was frailer than the male, and therefore, 'easier to be intrapped in these gross snares of the divell.' 6 It has been argued that many women especially elderly ones living outside the parameters of the patriarchal family and norms were the most vulnerable to accusations of witchcraft. ...read more.