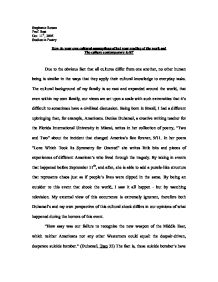 How do your own cultural assumptions affect your reading of the work andThe culture contemporary to it?

Stephanie Rowan Prof. Best Oct. 11th, 2005 Studies in Poetry How do your own cultural assumptions affect your reading of the work and The culture contemporary to it? Due to the obvious fact that all cultures differ from one another, no other human being is similar in the ways that they apply their cultural knowledge to everyday tasks. The cultural background of my family is so vast and expanded around the world, that even within my own family, our views are set upon a scale with such extremities that it's difficult to sometimes have a civilized discussion. Being born in Brazil, I had a different upbringing than, for example, Americans. Denise Duhamel, a creative writing teacher for the Florida International University in Miami, writes in her collection of poetry, "Two and Two" about the incident that changed America's fate forever, 9/11. In her poem "Love Which Took Its Symmetry for Granted" she writes little bits and pieces of experiences of different American's who lived through the tragedy. ...read more.

Duhamel adds a rhetorical question referring to the fact that terrorism is alive: "What are the new implications of this new situation for our attitude and strategies toward war and peace, how do we distinguish between the government's overboard definition of terrorism and actual terrorism?" (Duhamel, Two 33) It is a question to ponder to, since every government or monarchy in the world has their own tactics of terrorism within their own system of ruling. My country's government is a bowl of corruption in itself. Terrorism happens in and out of the government. There are mobs of gangsters who threaten the cities with violence - but it takes the actual bombing of the World Trade Center, to unite the world against terrorism? My views upon this incident are so bias but only because I have the privilege to be an outsider looking in at America from another perspective. Duhamel also adds an interesting quote by Jerry Falwell, a well-known fundamentalist Baptist minister: The abortionists have got to bear some burden for this because God will not be mocked. ...read more.

This may perhaps be an Orwell view to control the country: by narrowing the concentration of the war to just the American side; by applying "War is peace, Freedom is slavery, ignorance is strength" to the people - almost a totalitarian society. I was living in Madrid, Spain during the bombings of March 11th, 2004. I know what its like to live in fear of terrorism - so does everybody else. Denise Duhamel's poem "Love Which Took Its Symmetry For Granted" represents her views on how the public reacted to the terrorist act on September 11th, 2001. She adds irony, truth, and even rhetorical questions to represent the cultural side of her and her fellow Americans. We both come from different parts of the world, and have experienced different things - so our cultural values differ as well as our lifestyles. With her examples of American knowledge, she is able to question the political views of her nation, and therefore it affects the way I read her poetry knowing that it has her own personal views on such important matters. ...read more.