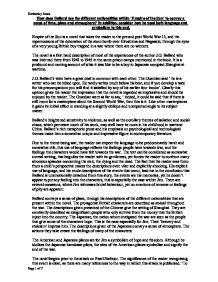 How does Ballard use the different nationalities within 'Empire of the Sun' to convey a sense of time, place and atmosphere?

How does Ballard use the different nationalities within 'Empire of the Sun' to convey a sense of time, place and atmosphere? In addition, consider how he used both language and symbolism to this end. Empire of the Sun is a novel that takes the reader to the pre and post World War 11, and the repercussions of the detonation of the atom bomb over Hiroshima and Nagasaki, through the eyes of a very young British boy trapped in a war where there are no winners. The novel is a first hand description of most of the experiences of the author J.G. Ballard who was interned there from 1942 to 1945 in the same prison camps mentioned in the book. It is a profound and moving account of what it was like to be a boy in Japanese occupied Shanghai at wartime. J.G. Ballard's texts have a great deal in common with each other. The Guardian said ' he is a writer who can be relied upon. He rarely writes much below his best, and if you develop a taste for his preoccupations you will find it satisfied by any of his earlier four books'. Clearly this opinion gives the reader the impression that the novel is regarded as impressive and should be enjoyed by the reader. The Guardian went as far to say, ' indeed, it could be said that if there is still room for a masterpiece about the Second World War, then this is it. Like other masterpieces it gains its initial effect in standing at a slightly oblique and unexpected angle to its subject matter. Ballard's heightened sensitivity to violence, as well as the corollary themes of isolation and social chaos, which permeate much of his work, may well have its roots in his childhood in wartime China. Ballard's rich metaphoric prose and his emphasis on psychological and technological themes make him a somewhat unique and impressive figure in contemporary literature. ...read more.

The Japanese, the instigators of the war, ironically are greatly admired by Jim, a boy from a nationality who would be considered one of their vast amount of enemies. This admiration comes in many forms throughout this novel. Jim was 'impressed by their bravery and stoicism, and their sadness which struck a curious chord with him, who was never sad'. Although Jim deeply admired the Japanese, his admiration for them grew stronger due to them having the things he didn't. Food the main attributer to life, was something that Jim lacked, and the Japanese had 'As they smoked their cigarettes the Japanese smiled to themselves, watching Jim devour the shreds of fatty rice. 'The Japanese soldier who had taken pity on Jim, recognising that this small boy was starving, began to laugh good-naturedly, and pulled the rubber plug from his metal water-bottle'. Food is power within this period of time, it is therefore as if the Japanese are in control of all, they control Jim, but fortunately for him, they do not abuse this power. Due to the kindness of the Japanese soldiers, Jim's admiration for them has grown. They have helped his survival. This relationship that Jim has with the Japanese occurs many times within the novel. Private Kimura is example of Jim bonding with a Japanese soldier. Private Kimura's kindness to Jim is clear within the form of many events that occur within the time that they know each other. Private Kimura 'had grown almost as much as Jim in his years at the camp'. Jim's admiration for the Japanese soldier had been noticed and this admiration was fed by Private Kimura 'often inviting Jim to the bungalow he shared with three other guards and allowed him to wear his kendo armour'. This kindness to Jim is later contrasted by the brutal beating of the Chinese Coolie. Like many of Jim's previously detailed and dispassionate descriptions of brutal behaviour, the coolies beating isn't described any differently. ...read more.

When it reached the pavement the Chinese stepped back, their faces expressionless. Jim glanced at the people around him, the clerks and coolies and peasant women, well aware of what they were thinking. One day China would punish the rest of the world, and take a frightening revenge'. Jim's time within the camp has made him realise that the Chinese are actually alive, their existence has actually become noticeable to Jim, and he now disagrees with the cruel treatment that he once issued onto them. The final paragraph of the novel is very similar to the beginning paragraph, except the mood is greatly different. The description unlike many in the book appears to have a sense of sadness and feeling to it. Previously when the Chinese coffins were described, a brief description was just given, whereas now, the description ends 'driven once again to the shores of this terrible city'. This feeling added to the final description given of Shanghai, makes the ending of the book powerful. Ballard known not to include any feeling into his work, ends his story with an impact on the reader, they are aware that Jim feels a sense of sadness and possible hatred to the city that he once thought was a great place to be. This novel is a first hand description of a war experience, and is therefore considered by many as a 'masterpiece'. This novel leaves nothing to the imagination, everything is described in great detail, and in a way that paints a picture in the readers mind. This effective use of detached unemotional memories makes the descriptions powerful and creates emotions within the reader. This novel is considered by the Guardian as 'above all, a book of triumph and truthfulness of tone'. Ballard's rich metaphoric prose and his emphasis on psychological and technological themes make him a somewhat unique and impressive figure in contemporary literature. Ballard's work although considered by many as somewhat grotesque, is thoroughly enjoyed by many today as a great novel, I would agree with this, it is interesting to read, and every word and description grips the readers attention. ...read more.