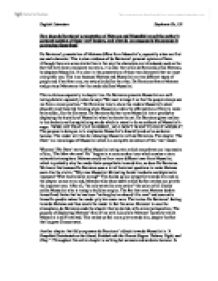 How does de Bernieres' presentation of Metaxas and Mussolini reveal the author's personal opinion of these 'real' leaders, and what do you suppose is his purpose in portraying them thus?

How does de Bernieres' presentation of Metaxas and Mussolini reveal the author's personal opinion of these `real' leaders, and what do you suppose is his purpose in portraying them thus? De Bernieres' presentation of Metaxas differs from Mussolini's, especially when we first see each character. This is clear evidence of de Bernieres' personal opinion of them. Although there are some similarities in the way the characters are introduced, such as the fact that both have omniscient narrators, it is clear that while de Bernieres pities Metaxas; he despises Mussolini. It is clear in the presentation of these two characters that we must only prefer one. This is so because Metaxas and Mussolini are two different types of people and if we favor one, we naturally dislike the other. De Bernieres favors Metaxas and portrays Metaxas so that the reader dislikes Mussolini. ...read more.

Whereas `The Duce' starts off as Mussolini acting vain which exacerbates our impression of him, `The Man who said `No'' begins in a more somber tone which creates a more vulnerable atmosphere. Metaxas could not be a more different man from Mussolini, which is probably why the reader feels sympathetic towards him, as does De Bernieres. We know this because De Bernieres uses a lot of rhetorical questions to make Metaxas seem like the victim. "Why was Mussolini fabricating border incidents and diplomatic impasses? What had he done wrong?" This builds up our sympathy towards him and as the chapter comes to an end, Metaxas talks about death which further evokes our pity for the impotent man. After all, "he only wants his own nation"-the union of all Greeks unlike Mussolini who is trying to build an empire. ...read more.

The synonymous that de Bernieres uses such as `This Promiscuous Syphilitic', `Father of Innumberable Stunted Bastards' and `Foul-Mouthed Peasant' all capture an aspect of Mussolini's character and contradicts the Duce's actions at the same time. These synonymous are clear evidence of de Bernieres personal opinion of Mussolini. De Bernieres also hints that Mussolini is deranged for he "had Himself filmed winning tennis matches against professionals in games umpired by the Minister of Propaganda". At the end of the chapter, de Bernieres displays sardonic humour in response to Mussolini's actions. The increasing of capitalization near the end also suggests a climatic hysterical situation with Mussolini's pathetic actions. This is exacerbated with each capitalized insult which emphasizes the end-"VIVA IL DUCE". His purpose is obvious- to further humiliate Mussolini in front of the Cephallonian people and his readers. In conclusion, de Bernieres' personal presentation of Metaxas and Mussolini strongly differ and the purpose of each is to display the characteristics of each-no matter how absurd or pitiful. ...read more.