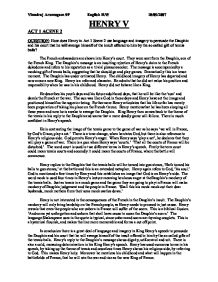 How does Henry in Act 1 Scene 2 use language and imagery to persuade the Dauphin and his court that he will avenge himself of the insult offered to him by the so called gift of tennis balls?

HENRY V ACT 1 ACENE 2 QUESTION: How does Henry in Act 1 Scene 2 use language and imagery to persuade the Dauphin and his court that he will avenge himself of the insult offered to him by the so called gift of tennis balls? The French ambassadors are shown into Henry's court. They were sent from the Dauphin, son of the French King. The Dauphin's message is an insulting rejection of Henry's claim to the French dukedoms and refers to his reputation as a trivial pleasure-seeker. The message is accompanied by a mocking gift of tennis balls, suggesting that he should go and play games. Dramatically this is a tense moment. The Dauphin has under estimated Henry. The childhood imagery of Henry has departed and now arose a new King. ...read more.

There is a tone change, when he states God, but there is also reference to Henry's religious side. God permits Henry's anger. When Henry says 'play a set', he declares that they will play a game of war. There is a pun when Henry says 'courts.' 'That all the courts of France will be disturbed.' The word court is used in two different terms in Henry's speech. Firstly the term court could mean tennis courts and secondly it could mean the courts of France, where the battle will commence. Henry replies to the Dauphin that the tennis balls will be turned into gun stones, 'Hath turned his balls to gun stones,' at the battle and this is an extended metaphor. Henry again refers to God, 'his soul.' God is mentioned a few times by Henry and this establishes an image that God is on Henry's side. ...read more.

The language Shakespeare uses in the quote is typical, since unborn and scorn are rhyming couplets. This is a hysterical flourish, and makes the line more memorable and forms a cut off point. In conclusion there is a great deal of language and imagery in King Henry's speech to persuade the Dauphin and his court that he will avenge himself of the insult offered to him by the so called gifts of the tennis balls. Henry's reply to the Dauphin's message shows dignity, self-control and wit. There is also a cold, menacing determination in his King Henry's speech. Henry has used numerous terms in his speech, by taking up the theme of tennis and countless times Henry shows his religious side, by referring to God. This makes Henry holy. Moreover he mentions his childhood and what will happen in the battlefields of France, that he will win the war and rise as the new King of France. Vimalraj Arumugam 9P English H/W 10/05/2007 ...read more.