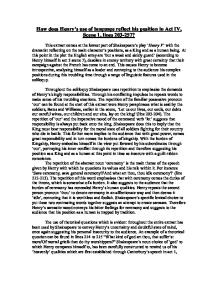 How does Henry's use of language reflect his position in Act IV, Scene 1, lines 203-257? This extract comes at the lowest part of Shakespeare's play 'Henry V' with the dramatist reflecting on the main character's positions, as a King and as a human being. At this point in the plot the English army are 'but a weak and sickly guard' (according to Henry himself in act 3 scene 7), desolate in enemy territory with great certainty that their campaign against the French has come to an end. This causes Henry to become introspective, analysing himself as a leader and conveying to the audience his complex positions during this troubling time through a range of linguistic features used in the soliloquy. Throughout the soliloquy Shakespeare uses repetition to emphasise the demands of Henry's kingly responsibilities. Through his conflicting impulses he repeats words to make sense of his troubling emotions. The repetition of the familiar possessive pronoun 'our' can be found at the start of this extract were Henry paraphrases what is said by the soldiers, Bates and Williams, earlier in the scene, 'Let us our lives, our souls, our debts our careful wives, our children and our sins, lay on the king!'(line 203-204). ...read more.

Therefore with characteristics of both a king, as seen in earlier scenes of the play, and as human Henry's position is seen as balanced, a quality that is suggested to be had by great leaders. During the soliloquy the hyperbolic 'O' has been used to heighten the importance of what Henry is about to say capturing the audience's attention through it's long exaggerated sound. This artificial mode of address which is prominently employed by the Chorus is used by Shakespeare in Henry's soliloquy to build up its intensity making a powerful impact upon the audience. For example in the following quotation (line 206-208) the use of the hyperbolic 'O' starts a ladder effect of increasing syllables controlled through the mean of commas. This in turn signifies a building of emotions, or perhaps Henry's frustrations. 'O hard condition, twin-born with greatness, Subject to the breath of every fool, whose sense No more can feel but his own wringing.' Shakespeare has inventively put the comma after the words 'hard condition' which are subsequent to the powerful 'O' to emphasise Henry's demanding position at this crucial point of the play. In addition Shakespeare uses the compound adjective 'twin-born' to show the duality of Henry's position, as a great king and as a great human. ...read more.

In line 255 the 'wretched slave' is compared to a 'lackey' (line 245) connoting a pawn from that of a chess game, that can easily be taken. This simile suggests that Henry's public position is always being analysed, and if he doesn't maintain this position it is only a matter of time before he is taken by the pressure of his suppressed human emotions. This view of pawn also suggests the idea that his human characteristics are held hostage by his daily responsibilities as a dutiful monarch. Such as in light of recent events at Harfleur, Henry's remorse for the loss of life does not stand in the way of his royal rites of the French throne. Overall the dramatic purpose of act IV, scene 1, lines 203-257, reflects the debates of kingship, with Shakespeare's 'model of the ideal king' being portrayed through Henry's personal side which is seen for the first time by the audience. This in turn allows the audience to see Shakespeare's full characterisation of Henry showing his positions as a, Christian leader (), a statesman (), a judge (), a warrior (), and now as a human. Through the use of language features found in the major soliloquy the audience now can reflect on the '3D' position of Henry, as a king and as a human being. 1814 words (not incl. title) ...read more.