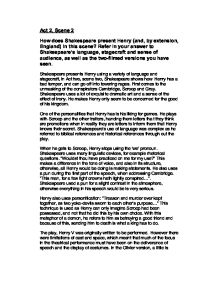 How does Shakespeare present Henry (and, by extension, England) in this scene? Refer in your answer to Shakespeare's language, stagecraft and sense of audience, as well as the two-filmed versions you have seen.

Act 2, Scene 2 How does Shakespeare present Henry (and, by extension, England) in this scene? Refer in your answer to Shakespeare's language, stagecraft and sense of audience, as well as the two-filmed versions you have seen. Shakespeare presents Henry using a variety of language and stagecraft, in Act two, scene two, Shakespeare shows how Henry has a bad temper, and can go off into towering rages. First comes to the unmasking of the conspirators Cambridge, Scroop and Gray. Shakespeare uses a lot of exquisite dramatic art and a sense of the effect of irony. He makes Henry only seem to be concerned for the good of his kingdom. ...read more.

"Wouldst thou have practiced on me for my use?" This makes a difference in the tone of voice, and also in its structure, otherwise, all Henry would be doing is making statements. He also uses a pun during the first part of the speech, when addressing Cambridge. "This man, for a few light crowns hath lightly conspired...". Shakespeare used a pun for a slight contrast in the atmosphere, otherwise everything in his speech would be is very serious. Henry also uses personification: "Treason and murder ever kept together, as two yoke-devils sworn to each other's purpose..." This technique is used as Henry can only imagine Scroop had been possessed, and not that he did this by his own choice. ...read more.

The subject was felt unsuitable, the whole mood of the wartime was paranoid about the possibility of traitors, and so this was cut the film. This version looked more like a fairy tale, there was the same fine weather giving it a positive, happy feel with no sign of violence at all. In the beginning of this scene it showed a Bishop blessing Henry, which showed that god, was believed to be on his side. The Branagh version does not cut out this scene, it was made to be very dramatic with signs of violence as it is part of the lifestyle of this film. The king treats the traitors very harshly, especially to Scroop as he was one of the king's closest friends. ...read more.