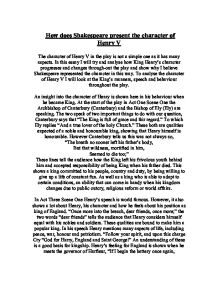 How does Shakespeare present the character of Henry V

How does Shakespeare present the character of Henry V The character of Henry V in the play is not a simple one as it has many aspects. In this essay I will try and analyse how King Henry's character progresses and changes through-out the play and show why I believe Shakespeare represented the character in this way. To analyse the character of Henry V I will look at the King's manners, speech and behaviour throughout the play. An insight into the character of Henry is shown here in his behaviour when he became King. At the start of the play in Act One Scene One the Archbishop of Canterbury (Canterbury) and the Bishop of Ely (Ely) are speaking. The two speak of two important things to do with our question, Canterbury says that "The King is full of grace and fair regard." To which Ely replies "And a true lover of the holy Church." These both are qualities expected of a noble and honourable king, showing that Henry himself is honourable. However Canterbury tells us this was not always so, "The breath no sooner left his father's body, But that wildness, mortified in him, Seemed to die ...read more.

This is the scene in which Henry passes himself off as an officer and a soldier when he walks among his troops. Here he speaks in continuous prose (the language of the common man). Henry speaks of his right to start this war and of his determination. "I myself heard the king say he would not be ransomed." this is one example of Henry's determination. Henry speaks so convincingly and with passion that he manages to turn a character named Bates, from questioning the king, to being willing to fight for him in battle. This scene, again, shows more desirable qualities in Henry. When Richard Earl of Cambridge (Cambridge), Lord Scroop of Masham (Scroop), and Sir Thomas Gray (Gray) are found to be traitors in Act Two Scene Two, a great aspect of Henry's behaviour and character is shown as Henry feels deeply betrayed and feel he has to question all loyalties. The King's intelligence and cunning is shown when he sets a trap for the traitors, he asks them what they would do to punish a traitor, "Enlarge the man committed yesterday, That railed against our person". To which Scroop replies, "That's mercy, but too much security. ...read more.

With all these qualities being shown by the king it becomes more obvious what Shakespeare is trying to do , he is creating a perfect king. In this scene Henry is left alone with the French princess, Katherine and her attendant Isabel. "Mock mercifully, the rather, gentle princess, because I love thee cruelly." This is just one line spoken by Henry to woo Katherine. I believe that in this play Shakespeare used the character of Henry V to show his patriotism and inspire it in others. By telling the story that this famous and miraculous victory at Agincourt was lead by a king that was perfect he is implying that England is the country of God. Also the victory of England inspires patriotism in the common man and a belief that they are a special people chosen by God. In Henry V Shakespeare shows a greatness and divinity that all Englishmen should strive to achieve, by doing this he is creating a role-model for his time, a role-model that especially nobles would do well to follow as Henry the V has the qualities of a perfect gentlemen. One could perhaps say that in Henry V Shakespeare is setting his guidelines for a Utopian society (if everyone was as honourable as king Henry V). 1084 words ...read more.