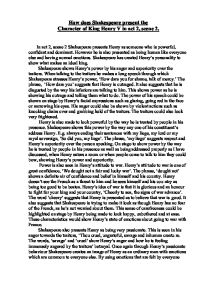 How does Shakespeare present the Character of King Henry V in act 2, scene 2.

How does Shakespeare present the Character of King Henry V in act 2, scene 2. In act 2, scene 2 Shakespeare presents Henry as someone who is powerful, confidant and dominant. However he is also presented as being human like everyone else and having normal emotions. Shakespeare has created Henry's personality to show what makes an ideal king. Shakespeare shows Henry's power by his anger and superiority over the traitors. When talking to the traitors he makes a long speech through which Shakespeare stresses Henry's power, 'How dare you for shame, talk of mercy.' The phrase, 'How dare you' suggests that Henry is outraged. It also suggests that he is disgusted by the way his inferiors are talking to him. This shows power as he is showing his outrage and telling them what to do. The power of his speech could be shown on stage by Henry's facial expressions such as glaring, going red in the face or narrowing his eyes. His anger could also be shown by violent actions such as knocking chairs over and grabbing hold of the traitors. ...read more.

This is seen in his anger towards the traitors, 'Thou cruel, ungrateful, savage and inhuman creature. The words, 'savage' and 'cruel' show Henry's anger and how he is feeling immensely angered by the traitors' betrayal. Once again through Henry's passionate behaviour Shakespeare creates an image of Henry as an ordinary man with emotions which are common to everyone else. By using emotions that are felt by everyone such as anger, he makes Henry seem like a normal person not some kind of God who is perfect. Henry is also presented as being a fair, kind and honourable king. His fairness and kindness are seen by the way he treats characters in the script unaccording to their status. These qualities are seen by the way he deals with someone who has committed an offence, 'And on his more advice we pardon him'. The word, 'pardon' suggests that the king has forgiven the criminal. It also suggests that he is a kind person as he is allowing the criminal to go free. Shakespeare presents Henry as being a fair person by the way he gives the traitors a chance to own up to what they have done, 'We carry not ...read more.

The phrase, 'by interception they dream not of' suggests that the king is cunning as he has found out that they are traitors without them knowing. I think that Shakespeare presents king Henry as a character who is powerful, respected, fair, cunning and basically human. These are the qualities that I believe Shakespeare thought a good king should possess. Power is an important quality for Henry as it gives him control and respect. I think the audience of this script would want the king to be powerful as it gives a feeling of security and well being. Shakespeare presents Henry as being fair, to show that a good king should treat everyone justly and in a humane way. Henry is presented as cunning in order to show that a king should have intelligence and also be able to overcome and workout problems such as treachery. The most important quality that I think Shakespeare gives Henry's character is that of being human. It brings Henry down from the clouds and the image of him being a God who cannot do anything wrong down to earth so that normal people can understand him and relate to him more freely. It shows that although he's a king, he still shares all the pains and emotions of a normal person. ...read more.