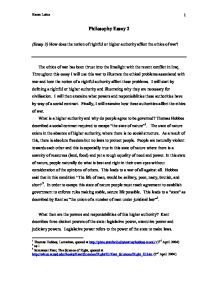 How does the notion of rightful or higher authority affect the ethics of war?

Philosophy Essay 2 (Essay 3) How does the notion of rightful or higher authority affect the ethics of war? The ethics of war has been thrust into the limelight with the recent conflict in Iraq. Throughout this essay I will use this war to illustrate the ethical problems associated with war and how the notion of a rightful authority affect these problems. I will start by defining a rightful or higher authority and illustrating why they are necessary for civilisation. I will then examine what powers and responisiblities these authorities have by way of a social contract. Finally, I will examine how these authorities affect the ethics of war. What is a higher authority and why do people agree to be governed? Thomas Hobbes described a social contract required to escape "the state of nature"1. The state of nature exists in the absence of higher authority, where there is no social structure. As a result of this, there is absolute freedom but no laws to protect people. People are naturally violent towards each other and this is especially true in this state of nature where there is a scarcity of resources (land, food) and yet a rough equality of need and power. In this state of nature, people naturally do what is best and right in their own eyes without consideration of the opinions of others. This leads to a war of all against all. Hobbes said that in this condition "The life of man, would be solitary, poor, nasty, brutish, and short"2. ...read more.

On this basis the UN could be seen as the lawful authority by which the war should have been waged in order to meet the condition of just war theory. However, the UN is mainly an advisorary council and rarely commands war itself, but rather grants member states the authority to do so under this international law (only as a self-defence measure). So, although the UN did not wage the war in Iraq, the question is did they allow it under international law. This is a controversial matter. The argument is over the language of the first resolution placed on Iraq and whether it legally entails military action on Iraq. Unfortunately, there is no answer to this but the rejection of the second resolution by the UN leads me to conclude that the war was not waged by a lawful authority as although it was conducted by governments with the power to do so, it went against international law. The second condition for a just war is a just cause. America proclaimed that the war on Iraq was to protect itself from the weapons of mass destruction being produced by them. This would seem a just cause as it is self-defence, even though it is pre-emptive. However, it is argued that America was never in danger from these alleged weapons. The final condition is rightful intention. America's intention to rid evil of an oppressive dictator and advance democracy satisfy this condition. ...read more.

In conclusion, the notion of rightful or higher authority plays an important role in the ethics of war. A rightful is authority is usually an elected government whose power to wage war comes from the rights of its citizens for protection. That war must be waged by a rightful authority is one of the three conditions of just war theory. When analysed in relation to the recent war in Iraq there are various issues to consider when deciding whether the authority is lawful. One of the controversial problems arising from the Iraq war was the subsequent question of the authority of nations in relation to the UN. A rightful authority may also be a religious authority. This has lead to many bloody wars in the past and is the current major threat to world peace (Jihad). This usually comes down to the interpretation of the teachings. In Hinduism, the Bhagavad-Gita can be interpreted as to condone war or through the duty to protect. However, in Hindu teachings can be interpreted in such a way that violence becomes unthinkable. This is also the case with Islamic teachings. So it has been shown that war is often morally justified by means of rightful authority and self-defence. However, there is another school of thought when it comes to ethics of war, that of pacificsm. It is my opinion that we should be careful when examining the ethics of war in relation to just war theory or from religious authority because we can always misinterpret them to condone unneccessary violence. ...read more.