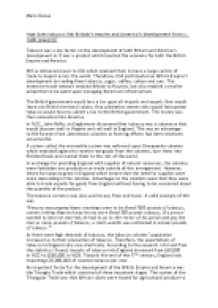 How does tobacco link Britains empire and Americas development from c. 1600 onwards?

﻿Maria Donue How does tobacco link Britain?s empire and America?s development from c. 1600 onwards? Tobacco was a key factor on the development of both Britain and America?s development as it was a product which boosted the economy for both the British Empire and America. Africa delivered slaves to USA which enabled them to have a large variety of trade to depart across the world. Therefore, USA participated on Britain Empire?s development by trading them tobacco, sugar, coffee, cotton and rum. This extensive trade network enabled Britain to flourish; but also enabled a smaller proportion to be spent upon managing 'American' infrastructure. The British government would levy a tax upon all imports and exports that would leave any British territory/colony, thus plantation owners who would have grown tobacco would have to submit a tax to the British government. ...read more.

However, desire for tobacco grew in England which meant that the need for supplies were more demanding in the colonies. Advantages to the colonists were that they were able to trade equally for goods from England without having to be concerned about the quantity of the product. The tobacco currency was also used to pay fines and taxes. A valid example of this was, ?Persons encouraging Negro meetings were to be fined 1000 pounds of tobacco; owners letting Negroes keep horses were fined 500 pounds tobacco; if a person wanted to become married, he had to go to the rector of his parish and pay the man so many pounds of tobacco; a man's wealth was estimated in annual pounds of tobacco.? As there were high demands of tobacco, the tobacco colonies? population increased as to their production of tobacco. ...read more.

The Triangular Trade was very useful for the development of America as they used the slaves for the plantation of tobacco without having to lose money as slaves were not paid. Therefore, they were at a great advantage and were rapidly able to increase their economy by trading the tobacco products to Europe for a high price. As a result to all of these factors stated above, the success of tobacco cultivation was undeniable to the development of the British Empire?s and America?s development from c. 1600 and onwards. Without the trade of tobacco, it could be argued that the colonists might have been left to survival from the little farming and had little, if any opportunity for economic growth independent of England. ...read more.