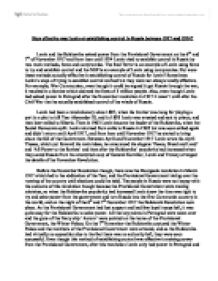 How effective was Lenin at establishing control in Russia between 1917 and 1924?

How effective was Lenin at establishing control in Russia between 1917 and 1924? Lenin and the Bolsheviks seized power from the Provisional Government on the 6th and 7th of November 1917 and from then until 1924 Lenin tried to establish control in Russia by two main methods, force and compromise. The Red Terror is an example of Lenin using force to try and establish control and the NEP is an example of Lenin using compromise. But were these methods actually effective in establishing control of Russia for Lenin? Sometimes Lenin's ways of trying to establish control worked but they were not always totally effective. For example, War Communism, even though it could be argued it got Russia through the war, it resulted in a famine which claimed the lives of 5 million people. Also, even though Lenin had seized power in Petrograd after the November revolution in 1917 it wasn't until after the Civil War that he actually established control of the whole of Russia. Lenin had been a revolutionary since 1887, when his brother was hung for playing a part in a plot to kill Tsar Alexander III, and in 1895 Lenin was arrested and sent to prison, and then later exiled to Siberia. ...read more.

This method was effective in keeping Lenin and the Communist Party in power but it is also an example of force used by Lenin, Lenin didn't get the power he wanted, so he took it by force. The continuation of the war and the economic crisis were two of the things which were preventing Lenin making progress in 1918, so Lenin was determined to make peace with Germany because he couldn't provide food for the Russians or solve the economic crisis until the war was stopped. Therefore, a peace treaty was signed between Russia and Germany in Brest Litovsk. The Treaty of Brest Litovsk took away 25% of Russia's population, 25% of the railway system, 37% of the grain production and 70% of the industry which caused some Russians to see the treaty as shameful. The Treaty of Brest Litovsk is another example of Lenin using compromise, but another example of him using force to establish control is the "Red Terror". This was when the Cheka and Trotsky's Red Army began a campaign of violence and terror in the hope of crushing any opposition the Communist Party might have. ...read more.

When he did die, Lenin was embalmed and put on display in Red Square until the demise of Communism in 1991. By some people in Russia Lenin was and still is praised as the man who led the Bolshevik Revolution of November 1917 which overthrew the Provisional Government and introduced Communism to Russia. Initially, after the November Revolution, Lenin only had control of Petrograd, but by the time of his death in 1924 he had effectively established control of the whole of Russia, and he did this by using both force and compromise. Lenin was determined to make his Communist ideas work in Russia, he was willing to fight his own people in a Civil War and the NEP shows us he was even willing to compromise with his own ideas to keep power, we know that Lenin truly believed in his views though, as this is shown when he closes Parliament after the Communist Party lose the January elections. Lenin wasn't always effective in his attempts to establish control though and it wasn't until the Civil War was won by the Communists that he had control of all of Russia, but from when he first seized power off the Provisional Government until his death, Lenin kept establishing more and more control and became the first Communist leader in the world. ...read more.