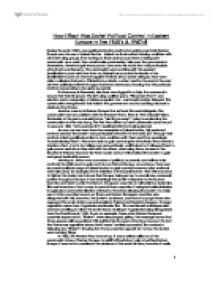 How EffectIVE Was Soviet Political Control In Eastern Europe In The 1950's &amp; 1960's?

How Effect Was Soviet Political Control In Eastern Europe In The 1950's & 1960's? During the early 1950's, one political effective method of gaining control in Eastern Europe was the use of Salami Tactics. Salami tactics involved forming coalitions with other left wing groups, then turning on them and accuse them of being anti-communist. As a result, they could make communism take over the governments themselves, therefore gain more power. One area this tactic that was particularly effective in was Hungary. The communists were working with the peasant Smallholder's party and then later on, Rakosi has accused the leader of the Smallholder's party of offences against the Red Army, and in doing so; they were able to dissolve their party. This led into a domino effect and by the end of the year all other political parties in Hungary had been destroyed, showing that this particular method was proving to be quite successful. Furthermore, in Romania, elections were rigged in to help the communists secure their hold in power. The left wing coalition party, "Plowmans Front", was election and a campaign of violence against non-communist parties followed. ...read more.

Economies were run via the Soviets, private farms were forced into collectivisation and the secret police force crushed any opposition. However this didn't sit well with the people of Eastern Europe. As a result of the collective farming, there were food shortages, shortage of consumer goods and a general drop in living standards. Furthermore the disliked secret police perfecuted churchgoers and anyone who was anti-communist. The government controlled all aspects of life, even the media, in which it was allowed the right to free speech. When Stalin died, the suffering masses of Eastern Germany went to riot. They saw the new leader Khrushchev as their means of, "salvation". He ended the feud with the Yugoslavian Tito, accepted Yugoslavia as an independent state and therefore the people of Hungary looked at this and believed that this would happen to them. Khrushchev seemed against Stalin, even though being a staunch Communist and in 1956, his speech named his as a tyrant and seemingly an evil man who did damage. Therefore, this gave the people of Hungary hope. They started their revolution against their puppet leader Rakosi. They burnt official portraits of him, tore down pictures ad statues of Stalin and when challenged by the police, instead of standing down, they fought back. ...read more.

This method was extremely effective. It provided a sold example to other countries, a crystal clear message, try this and you will be dealt with. In conclusion, in the early 1950's political soviet control over the Eastern countries was highly effective. Their methods ensured that they took a firm control over matters. However this was when Stalin was in control. When he died and Khrushchev and others came to power, they faced problems, opposition seemingly showing that their grip was loosening. Even when Stalin was gone, Khrushchev and Brezhnev used his methods of control to keep order. Any challenges were quashed. Even though reforms were tried, they were taken care of and hard-line communists resumed power. In my opinion, at the beginning, Soviet Political control over the countries was highly effective, they utilised their tools well. However, as Stalin died, political control loosened; there were riots and demonstrations against leaders, showing opposition, meaning control were not perfect. Therefore instead of political methods used to control, military methods were used instead, which were more successful. For that reason political methods of control were extremely successful at the start, however military methods later on overtook political methods; however this is not to take that political methods of control were not effective as they were. ?? ?? ?? ?? 1 ...read more.