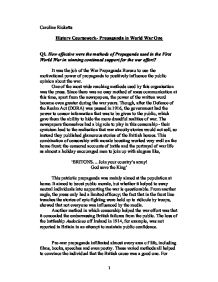 How effective were the methods of Propaganda used in the First World War in winning continued support for the war effort?

Caroline Ricketts History Coursework- Propaganda in World War One Q1. How effective were the methods of Propaganda used in the First World War in winning continued support for the war effort? It was the job of the War Propaganda Bureau to use the motivational power of propaganda to positively influence the public opinion about the war. One of the most wide reaching methods used by this organisation was the press. Since there was no easy method of mass communication at this time, apart from the newspapers, the power of the written word became even greater during the war years. Though, after the Defence of the Realm Act (DORA) was passed in 1916, the government had the power to censor information that was to be given to the public, which gave them the ability to hide the more dreadful realities of war. The newspapers themselves had a big role to play in this censorship- their cynicism lead to the realisation that war atrocity stories would not sell, so instead they published glamorous stories of the British heroes. This combination of censorship with morale boosting worked very well on the home front; the censored accounts of battle and the portrayal of war life as almost a holiday encouraged men to join up with slogans like, 'BRITONS... ...read more.

Secondly, the novel was published in 1961, over 40 years after the period in which the events are set. But these factors, in my opinion, do not diminish the sources' utility, as it is clear that the author has fully researched and explored the period because there are a number of accurate historical references within the text. For example, he refers to 'Kitcheners volunteers' and 'the boys of the Bulldog breed' among other things. I can also back up the sources' benefit from my own knowledge, as I know that this method of recruitment was actually used at this time in the Great War. The best-remembered example this has to be the case of the Accrington Pals. They are, almost certainly, the most famous of the battalions formed in the early months of the war. They volunteered in response to Kitchener's call for a volunteer army, and a large group of friends and neighbours from both Accrington and neighbouring towns, enlisted together to form a battalion with a distinctively local identity. I believe that despite the fact that this is a work of fiction, and the discrepancy of time, that this source would genuinely be useful to a historian studying the era. The account given, even though a work of the imagination, rings true as the not only the references, but the descriptions fit the feelings of the public and the events of the time. ...read more.

The reporter in Source F is saying how his reports 'do not tell the whole truth', as the public could not handle the reality and the pain felt by all those who had lost relatives. Another form of Censorship was the ban on film for private cameras. The government decided that no images of the conditions of the western front must reach the people at home. Not all government propaganda was issued to encourage support of the war; some articles and letters were printed by pacifists and religious groups persuading the population to abstain from war. This type of propaganda is shown in Source D, which states the views of the Independent Labour Party, who were a socialist party. They believe that the values of socialism transcend all war, and goes against the fundamentals of socialism. This 'Manifesto on the War' was printed on the 11th August 1914, only a matter of days after war was declared. The socialists were making their position very clear. This collection of sources demonstrates the wide range of forms propaganda took during the Great War. Although demonisation of the enemy played an important role in the Propaganda scheme, the information given in the sources does not support the belief that it was the most important. All evidence considered, only one of the sources shows support for this belief. Q1 - 875 words Q2 - 313 words Q3 - 996 words 1 ...read more.