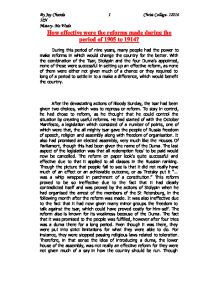 How effective were the reforms made in Russia by Stolypin during the period of 1905 to 1914?

How effective were the reforms made during the period of 1905 to 1914? During this period of nine years, many people had the power to make reforms in which would change the country for the better. With the combination of the Tsar, Stolypin and the four Duma's appointed, none of these were successful in setting up an effective reform, as none of them were either not given much of a chance or they required to long of a period to settle in to a make a difference, which would benefit the country. After the devastating actions of Bloody Sunday, the tsar had been given two choices, which was to repress or reform. To stay in control, he had chose to reform, as he thought that he could control the situation by creating useful reforms. He had started of with the October Manifesto, a legislation which consisted of a number of points, one of which were that, the all mighty tsar gave the people of Russia freedom of speech, religion and assembly along with freedom of organisation. ...read more.

Though obviously the duma are not to blame for this due to the limitations that they had by the tsar. The last intention of the October manifesto was to cancel the redemption fees. Tsar knew that there was only a short period left to pay these fees of, therefore he decided to end them. This was a pointless and unmeaning reform due to the fact that the fee's for the land that was introduced in 1855 and mostly the entire amount had been paid off. The Manifesto failed as an attempt of an effective reform because not enough time had gone into the planning of the manifesto and it was made up of contradictions, which had made the whole reform meaningless. In 1906, when Stolypin arrived in May as Minister of Interior and later in July became President of Council of Minister his main aims and goals were to improve the efficiency of the tsarism through conservative reforms. He had created a number of reforms because he realised that the only way to keep peace was make the critical reforms. ...read more.

In 1905 there had been an effective reform introduced, which was related to the issue of education. This probably had been the only effective reform due to that fact this was the first attempt to educate the lower society. He had done this by investing 19 million roubles, 1.8% of the budget. He had performed this piece of action again in 1914, though investing fours times as much, 76 million roubles, which was 4.2% of the budget. This was the only effective reform that the tsar had come up with in the nine years. However, a vital issue that he failed to see was that the people that he had educated might have later developed a brain and therefore could have questioned him. All the reforms in the nine year period had turned out to be a utter failure and totally ineffective due to that fact that they were all not properly planned out. In the following years the reform proved to be a letdown as the reforms turned out to be one of the main factors why there had been a revolution in 1917. By Jay Chavda 1 Christ College- 12216 12N History- Ms Wade ...read more.